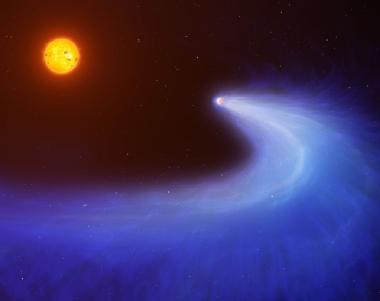 A giant cloud escaping from a warm, Neptune-mass exoplanet is reported in this week’s Nature.

Depicted in an image by Mark Garlick and issued by the University of Warwick, it has been suggested that low-mass exoplanets orbiting close to their parent stars could have had some fraction of their atmospheres ‘burnt off’ by extreme irradiation from the star, but confident measures of such losses have been lacking until now.

Commenting on the visual depiction Dr Peter Wheatley, from the University of Warwick’s Astronomy and Astrophysics Group and one of the research’s co-authors, said that:

“What we can see is a large cloud of hydrogen gas absorbing the light from a red dwarf star as its exoplanet, GJ 436b, passes in front. The cloud is created as of result of x-rays emitted from the red dwarf burning off GJ 436b’s upper atmosphere.

“The cloud forms a comet-like tail as a result of ultraviolet light coming from the star pushing on the hydrogen and causing it to spiral outwards.

“Around 1000 metric tonnes of hydrogen are being burnt off from GJ 436b’s atmosphere every second; which equates to only 0.1% of its total mass every billion years. The same process is likely to be much stronger on other exoplanets, where the entire atmosphere could be removed or evaporated to destruction”.

Dr Wheatley led the x-ray observations used to trace the heating of the GJ 436b’s atmosphere.