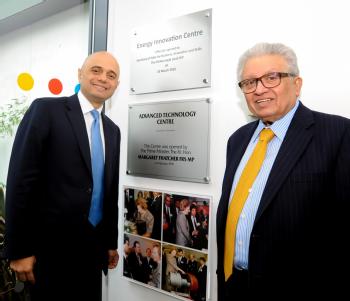 The Rt Hon Sajid Javid MP Secretary of State for Business, Innovation and Skills visited WMG, University of Warwick on Thursday 10th March to formally open the new £50m Energy Innovation Centre, the largest of its kind in Europe.

WMG is the largest manufacturing group in the world with 700 staff and an annual programme of £180m. The Energy Innovation Centre is one of seven R&D centres on the Warwick campus.

The Energy Innovation Centre is a centre for world-class innovation for the development of new battery chemistries. It is at the forefront of research, providing guidance and technical know-how in three key areas of Energy Storage; Energy Management; and Complex Electrical Systems.

The £80m research programmes are focused on the immediate priority of developing cheaper, higher energy density, safer batteries but will over time extend to other technologies such as fuel cells, ultra-capacitors and inductive charging.

The Secretary of State heard how the Centre has already helped attract four multi-million pound projects in the last year which will be crucial for the future of battery technology in the UK.

“Today I’m pleased to be opening the Energy Innovation Centre at Warwick Manufacturing Group. WMG is a world leader in battery technology research that supports the evolution of electric vehicles, promoting innovation and attracting investment to the local area.

“The Midlands Engine is home to a diverse range of exciting businesses and universities and its continued success is creating highly-skilled jobs. Today’s announcement is another example of why the economy here has been outperforming the rest of the country since 2010.”

“I am delighted that the Secretary of State has opened our Energy Innovation Centre. Electric and hybrid vehicles are the future of automotive and WMG is at the forefront of this research. We have a long history of research impact in hybrid, electric and low carbon vehicles which he has been able to see first-hand.”

Last March WMG was named as the "Electrical Energy Storage Spoke” of the government and industry funded £1 billion Advanced Propulsion Centre (APC), to co-ordinate a technical community with a shared interest in battery systems. WMG has made significant investments over the last 10 years to build expertise and facilities in the scale-up and evaluation of battery systems. As a result of these investments, and a strong network of academic and industrial partners, WMG was identified as the logical location to host the Electrical Energy Storage Spoke for the APC.

Since then there have been three further project announcements, working with companies such as Nissan, Faradion, Moxia Technology, Jaguar Land Rover, JCB, including leading a £14 million consortium to create a new automotive battery pack manufacturing research centre. AMPLiFII (Automated Module-to-pack Pilot Line for Industrial Innovation) will develop new knowledge, skills, technology and facilities to support UK industry seeking to use these new technologies and processes in vehicle battery systems. Working with Nissan, on a £19.4m project, to take forward the development of next-generation electric vehicle batteries in the UK, where WMG will investigate potential improvements to battery chemistry and increasing manufacturing yield, and to optimise automated manufacturing processes. And finally a £5.4 million project to exploit the world leading UK innovations in the area of battery technology.

Here is a press release on one of those announcements:
"Partnership to power up new 30% cheaper battery technology for solar storage"