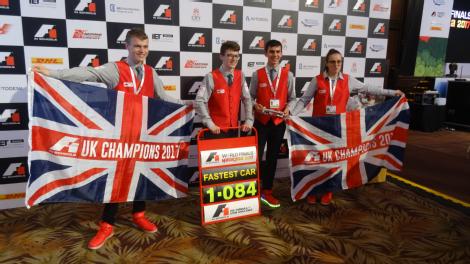 Four Coventry teenagers are celebrating after the car they designed was named the fastest in a worldwide competition.

Abi Hirons, Callum Kennedy, Eddie Hodierne and Elias Khimasia – known collectively as Academy Racing - returned to a winners’ welcome following their success at the F1 in Schools World Championships in Malaysia this week.

The team, all students at WMG Academy in Mitchell Avenue, Coventry, had spent a year designing,building, testing and racing their miniature Formula One car, Titan 22.

Some 26,000 schools took part in the F1 in Schools competition, which challenged students to create a CO2 powered car to travel 20 metres as fast as possible. Titan 22 reached the finish line in just 1.084 seconds.

Team member Eddie Hodierne, 17, said: “It was an amazing feeling to know we had designed the fastest car award in the world finals.

“It was an immense amount of pressure to put something so successful together but we worked hard and I am very proud of the team.

“It was overwhelming to see everyone in the school come turn out to welcome us on our return.”

The team were crowned UK champions earlier this year, securing themselves a place in the world final in Kuala Lumpur, where they competed against teams from 46 other countries.

WMG Academy’s Executive Principal Kate Tague said: “This is a fantastic achievement and we are extremely proud of Abi, Callum, Eddie and Elias. They have worked incredibly hard and to have designed the fastest car of its type in the world is an impressive feat.

“The four of them have very bright futures ahead of them. They have done WMG Academy, Coventry and the UK proud.”

Visitors will have a chance to meet the Academy Racing team and see the winning car at WMG Academy’s open day on Saturday 14th October, from 10am-2pm. Book at: www.wmgacademy.org.uk