The Alan Turing Institute and Intel have agreed to form a long term strategic partnership to deliver a research programme focussed on high-performance computing and data analytics.

Researchers from both organisations will work together on the programme alongside co-funded research fellows and software engineers.

In addition, Intel will dedicate a hardware architecture team at the Institute’s facilities so that new algorithms developed by The Alan Turing Institute feed into the design of Intel’s future generations of microprocessors.

As well as conducting research, the partnership will train a new generation of data scientists through The Alan Turing Institute’s doctoral programme, ensuring students are equipped with the latest data science techniques, tools, and methodologies. 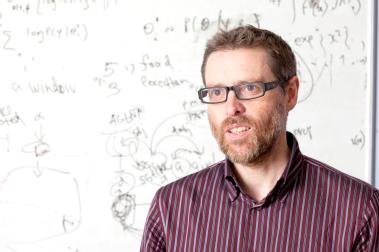 “The Alan Turing Institute is a hugely exciting development for the mathematical and statistical sciences in the UK and it will have a massive impact on my own research work. For example the results of recent research of my group now forms the technology that most Automated Teller Machines (ATM) employ in the detection of counterfeit currency. Now with the ability of these machines to obtain even more types of data the possibilities that Big Data presents to provide further services and safeguards to individual users of ATMs is amazing. But the exploitation of this new so called Big Data requires the development of new cutting edge mathematics and statistical methods to ensure we make the most of these opportunities. The ATI is going to enable my own group to work on these sorts of problems and take theory to algorithms to economically valuable products and services."

Both organisations will work together to raise awareness of the importance and potential of data science and algorithms.

Minister for Universities and Science, Jo Johnson, said: “Government is committed to ensuring the UK is the best place in Europe to innovate, patent new ideas and start a business. Big data offers huge potential for innovation which is why Government invested £42m in The Alan Turing Institute to secure the UK’s future in this important field.

“I welcome this new strategic partnership with Intel which is testament to the strength of the UK’s research base and an exciting opportunity for growth in our digital economy.”

Professor Andrew Blake, Director of The Alan Turing Institute, said: “Intel is a global leader in computing innovation and I am delighted that it has become a strategic partner. This is a great development for the Institute and for data science globally.

“Alan Turing was one of the first people to build an electronic computer. The partnership with Intel means that, true to his legacy, the Institute named after him will be contributing to the design of future generations of computers.

“The goal of The Alan Turing Institute is to drive scientific and technological discoveries in the use of big data and algorithms, which will create new business opportunities, and accelerate solutions to global challenges. We have, today, taken a significant step towards that goal.”

Christian Morales, Corporate Vice President, General Manager Intel EMEA, said: “The Data Scientist is a very captivating and crucial job of the 21st century. With the right combination of people and technology, Big Data has the potential to solve big problems in public health, medicine, science, agriculture and engineering. We are committed to helping The Alan Turing Institute develop a fertile breeding ground for data scientists, with the greater purpose of driving critical data analytics across all industries.”

The Alan Turing Institute is a joint venture between the universities of Warwick, Cambridge, Edinburgh, Oxford, UCL and the Engineering and Physical Sciences Research Council (EPSRC). The Institute will promote the development and use of advanced mathematics, computer science, algorithms and big data for human benefit.

The Alan Turing Institute is a joint venture between the universities of Cambridge, Edinburgh, Oxford, Warwick, UCL and the Engineering and Physical Sciences Research Council (EPSRC). The Institute will promote the development and use of advanced mathematics, computer science, algorithms and big data for human benefit.

The Institute will bring together leaders in advanced mathematics and computing science from the five lead universities and other partners and will conduct first class research and development in an environment that brings together theory and practical application. It will build on the UK's existing academic strengths and help position the country as a world leader in the analysis and application of big data and algorithm research.

The Institute is being funded over five years with £42 million from the UK government. The university partners are contributing £5 million each, totalling £25 million. The Institute is based at the British Library at the heart of London’s Knowledge Quarter. Its work is expected to encompass a broad range of scientific disciplines and be relevant across multiple business sectors.