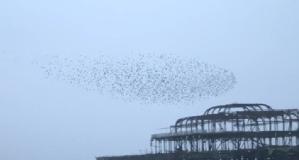 The mystery behind the movements of flocking starlings could be explained by the areas of light and dark created as they fly, new research suggests.

The research, conducted by the University of Warwick and published in the journal PNAS, found that flocking starlings aim to maintain an optimum density at which they can gather data on their surroundings. This occurs when they can see light through the flock at many angles, a state known as marginal opacity. The subsequent pattern of light and dark, formed as the birds attempt to achieve the necessary density, is what provides vital information to individual birds within the flock.

The dynamic pattern of light and dark is created by birds within the flock altering the positions and angles at which they fly, causing a change in the amount of light let into the flock. The researchers observed that it was always possible to see areas of light coming through the flock, providing the initial insight that the changing patterns of light and dark had a role to play in the flock’s movement.

This insight led to the development of a computer model in which individual birds with simulated intelligence were attracted to the areas in the flock that could provide the most information on the rest of the flock[1]. When each simulated bird was attracted to the areas in the virtual flock that can provide the most information the result was a cohesive swarm.

The Warwick team then applied the model’s findings to flocks in the wild and established that there was a strong correlation between movements of the virtual and natural birds. 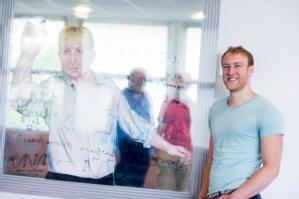 “An individual starling within a flock can see in front of them areas of light and dark created by other birds, forming a dynamic and changing silhouette”, says lead researcher Daniel Pearce from the University’s Department of Physics. “Our research ascertained that the silhouettes we external observers witness were a result of large flocks self-organising to achieve a marginally opaque state at which a bird can still see some of the light sky through gaps in the flock and gather information from other birds.

“When we observe a flock of starlings we are actually seeing a 2D projection of a dynamic, changing 3D environment. By developing this model we have been able to simulate this environment and see that when each bird is attracted to the areas in the flock that can provide the most information the result is a cohesive swarm that resembles a large flock of starlings in the wild”, comments Mr Pearce.

It had previously been thought that co-ordination of a flock was achieved through birds interacting only with neighbouring members but, argues Professor Emeritus and paper co-author George Rowlands, the new research marks “a paradigm shift in our understanding of how birds organise within a flock as it shows that the local interactions between birds are alone insufficient to explain large-scale flock organisation”.

Footnote and Notes to editor:

1. “We use a technique called agent based modelling of self-propelled particles, made famous by Vicsek et al (1995). Each bird is represented by a particle which each have an identical set of rules to follow (and likelihood of making a mistake). In this case the rules are a) follow your nearest neighbour and b) move towards the areas of the projection containing the most information. When lots of these particles are introduced, the result is a collective motion much like that of a real flock of birds”, says Mr Pearce.

· Video of the computer model and the virtual flock: http://www.youtube.com/watch?v=QPZbedm_fBA

· Photos and video available of starlings flocking over Brighton Pier, which were collected as part of the research, are available on request – a.t.frew@warwic.ac.uk

· Interactive simulated flocks used in the research can be viewed and tested here: http://www2.warwick.ac.uk/fac/sci/moac/people/students/2009/daniel_pearce/phd/projsim/#

· This work was partially funded by the UK Engineering and Physical Sciences Research Council through the MOAC and Complexity Doctoral Training Centres.