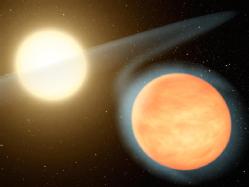 A University of Warwick astronomer has played a vital role in finding the first carbon-rich planet orbiting a star 1,200 light years away, which could be home to large rocks of carbon – such as diamond or graphite.

The planet was found last year by the WASP project, the UK's leading team of planet discoverers.  Now, astronomers led by Nikku Madhusudhan of the Massachusetts Institute of Technology have observed WASP-12b with NASA's Spitzer Space Telescope, and found that its atmosphere is dominated by molecules containing carbon.

Unlike Earth, which is rich in oxygen and has much smaller quantities of carbon, the planet WASP-12b is dominated by carbon and depleted in oxygen.

WASP team member Dr Pete Wheatley, from the University of Warwick’s physic department, was the one who proposed Spitzer observe WASP-12b.

He said: “The UKs WASP project, funded by the STFC research council, is finding many planets that are prime targets for NASA's Spitzer Space Telescope.

“It's fascinating to find a planet with so much carbon, and to imagine what other sorts of planet are out there".

The finding, reported in Nature this week, points to planets with compositions very different from those of our own Solar System, and has started scientists wondering whether life could exist on a carbon-rich planet with little oxygen or water, but plenty of methane.

“WASP-12b is one of our most important finds", says Prof. Don Pollacco, of Queen's University Belfast, who led the construction of the WASP camera array that found the planet, "It is the size of Jupiter and among the hottest planets known, orbiting its star in only 26 hours".

Because WASP-12b is so close to its star and so hot, the Spitzer Space Telescope can detect the heat of the planet, and studying this radiation tells us which molecules are in its atmosphere.

Earth is typical of Solar-System planets in having more oxygen than carbon. The Earth is mainly iron, oxygen and silicon, with silica-sand - being the commonest mineral.