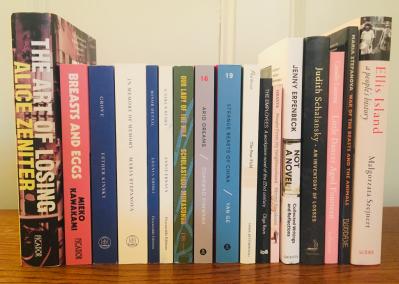 17 titles have been longlisted for the fifth annual award of the Warwick Prize for Women in Translation.

The £1000 prize was established by the University of Warwick in 2017 to address the gender imbalance in translated literature and to increase the number of international women’s voices accessible by a British and Irish readership. For the second year running, the prize is generously supported by the British Centre for Literary Translation and the British Comparative Literature Association.

The 2021 prize is judged by Amanda Hopkinson, Boyd Tonkin and Susan Bassnett. Last year the prize was awarded to The Eighth Life (Scribe UK), written by Nino Haratischvili and translated from German by Charlotte Collins and Ruth Martin.

The 2021 competition received a total of 115 eligible entries representing 28 languages. In what has undoubtedly been a difficult period for publishing, the number of submissions to the prize dipped slightly from 2020, but this still represents a substantial increase on the first three years of the competition. The longlist covers ten languages with French, German, Japanese and Russian represented more than once. Translations from Georgian and Thai are represented on the longlist for the first time in 2021.

Maria Stepanova and her translator from Russian Sasha Dugdale feature twice on the longlist with In Memory of Memory (Fitzcarraldo Editions) and War of the Beasts and the Animals (Bloodaxe Books). Also longlisted are previous winners of the prize Annie Ernaux and Alison L. Strayer who won in 2019 with The Years. Writers Jenny Erpenbeck, Hiromi Kawakami, Esther Kinsky and Yan Ge, and translators Elisabeth Jaquette, Frank Wynne, are all on the longlist for the second time.

“Despite a period of obstacles and uncertainties for international publishing, the 115 submissions for this unique award continue to showcase the vitality and variety of translated work by women writers from around the world now published in the UK.

“These long-listed titles not only span cultures and continents from China to Georgia, and from Thailand to Poland, they also cover a spectrum of literary forms. The list includes poetry, fiction of many kinds – from futuristic fables to family sagas – as well as a range of imaginative non-fiction, from family memoir and biographical essay to social history.

“In every case, the artistry of the translator keeps pace with the invention of the author. Each book created its own world in its own voice. The judges warmly recommend them all.”

Prize coordinators Dr Holly Langstaff and Dr Chantal Wright of the School of Visual Arts, Performance and Visual Cultures at the University of Warwick comment:

“The variety of work submitted to the prize in 2021 demonstrates a continued commitment on the part of the translation community to ensure that a wider range of women’s voices from across the world are heard. The Women in Translation Month initiative, started by the book blogger Meytal Radzinski in 2014 and taking place every August, continues to be embraced by readers, translators and publishers. The work of independent publishers in particular to promote writing by women in translation is evident both from this year’s list of eligible submissions and the longlist. It is wonderful to see a range of source languages and genres on the longlist, which demonstrates the breadth of high-quality writing by women available in translation and published during a year of upheaval.”

The shortlist for the prize will be published in early November. The winner will be announced at a ceremony on Wednesday 24 November.