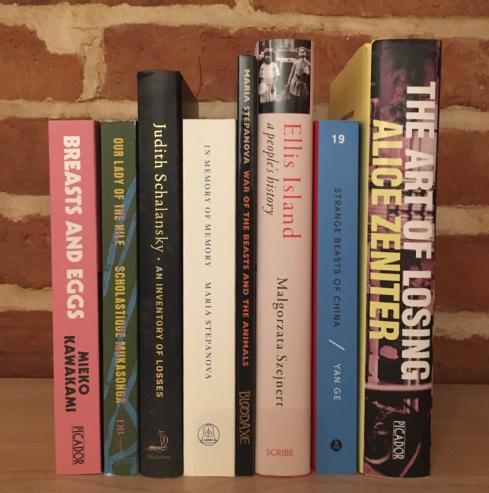 Eight titles have been shortlisted for the fifth annual award of the Warwick Prize for Women in Translation.

Maria Stepanova and her translator from Russian Sasha Dugdale are twice represented on the shortlist with In Memory of Memory (Fitzcarraldo Editions) and War of the Beasts and the Animals (Bloodaxe Books).

The judges said of the shortlist:

“This powerful and eclectic shortlist spans a world of stories, from China and Japan to Russia, Rwanda and Algeria. It also salutes the formal boldness and originality of women’s writing around the world today, with books that range from innovative poetry and fiction of many kinds – from the fable to the saga – to works that take non-fiction narrative into exciting new territories. Together, the titles on the list celebrate the literary imagination without boundaries or constraints, served in every case by translations of the highest calibre.”

“We are thrilled to see six source languages and a diverse range of genres represented on the shortlist in 2021. The variety and quality of work submitted to the prize this year is reflected in this list which crosses continents and genres. We look forward to celebrating this list of excellent works – and the fifth year of our existence – with the translation and publishing community that makes this prize possible.”

The winner will be announced in an online ceremony on Wednesday 24 November.

More details are available at the Warwick Prize for Women in Translation webpage. Regular updates are posted on Facebook and Twitter. For further information about the prize, please contact the coordinators Chantal Wright and Holly Langstaff at womenintranslation@warwick.ac.uk or 02476 573092.