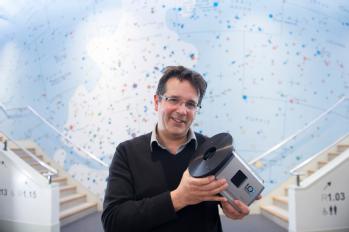 University of Warwick scientists have begun searching for planets after the unveiling of twelve robotically controlled telescopes.

The telescopes, which form a wide-field observing system called the Next Generation Transit Survey (NGTS), aim to detect the slight dimming of a star when a planet passes across its face.

The Warwick scientists aim to use the telescopes to find planets from the size of Neptune down to ones twice the size of the Earth.

Based at European Southern Observatory’s (ESO) Paranal Observatory in northern Chile the telescopes will be remotely controlled by a team at the University of Warwick’s campus.

Commenting on the telescopes’ launch and what they will help scientists to discover Dr Peter Wheatley, one of the NGTS project leads from the University’s Department of Physics said:

“We are excited to begin our search for small planets around nearby stars. The NGTS discoveries, and follow-up observations by telescopes on the ground and in space, will be important steps in our quest to study the atmospheres and composition of small planets such as the Earth.

“Planets between Earth and Neptune size, known as super-Earths, appear to be common around other stars and yet are poorly understood because there are no examples in our own Solar System.

“We want to find out what they are made of and study their atmospheres. Results to date show that super-Earths may be a surprisingly mixed bag of rocky planets like Earth, water worlds, and fluffy balls of gas.”

Recent developments in technology will help the project reach a never-before-seen level of accuracy in measuring the brightness of stars with a ground-based wide-field survey instrument. Dr Wheatley explains:

“The twelve robotic telescopes of NGTS have been designed to detect smaller dips in star brightness than previous ground-based surveys, down to just 0.1% of the light from the star”.

NGTS will cover more sky than previous projects, examine a greater number of bright stars and will find planets that are bright enough for detailed study by instruments such as the Hubble Space Telescope (HST) and the European Southern Observatory's Very Large Telescope (VLT) - the largest telescope in the world and co-located with NGTS.

The £2.5m capital costs of the project have been met by the consortium institutes and the running costs are currently funded by the UK through the Science and Technology Facilities Council (STFC).

NASA’s orbiting Kepler mission has a higher accuracy of stellar brightness measurement but probes a smaller region of the sky than NGTS. The wider NGTS search will find brighter examples of small exoplanets that are better suited for detailed study.