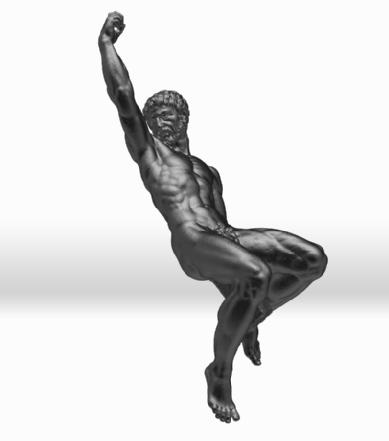 In February 2015 the Fitzwilliam Museum, Cambridge, made headlines when a team of academics proposed that two unsigned and undocumented bronzes were, in fact, cast from models made by Michelangelo.

While the original models were evidently incredibly beautiful and sophisticated, the thick-walled casts are less successful with much of the original detail lost. The research team is trying to establish why this is so, with the help of experimental replicas made by Andrew Lacey, a contemporary sculptor and bronze-caster with a profound knowledge of archaeo-metallurgy.

He has cast two reduced-scale replicas - the first using the traditional method of spruing, the second, using the more unorthodox method, which Lacey believes was used to create the bronzes in question - as well as a full-size version.

The replicas are exact copies made with the assistance of high resolution scans of the original bronzes by WMG researchers at Warwick University.

“There are anatomical features on the bronzes that could only have been known by someone who had dissected the human body or who had attended dissections. Dissections were very rare before 1543 and the publication of Vesalius’ “Fabrica” which was the first accurate and seminal anatomical text in the world. In the art world only Leonardo and Michelangelo had the anatomical knowledge, gained through the regular dissection of corpses, that would have been necessary to produce such anatomically accurate nude figures. There is no primary proof of other artists who dissected corpses on a regular basis in the first half of the 16th century. Some features of the anatomy on the two figures are not visible on observation alone and could only have been known through the practice of cutting open cadavers. I have also identified features of detailed anatomy of the two figures that are peculiar to the documented sculptures of Michelangelo and which could be characterised as signature details."

"I looked at the sartorius groove , the triangle of auscultation and the wrongly contracted two heads of gastrocnemius, as well as the details found in other known works of Michelangelo ie. Hallux with abducted elongated second toe, coiffured and "blow-dried" Tanner grade 5 male pubic hair position and distribution, rectus abdominis with anomalous extra tendinous intersection for an “8-pack” as seen also on some of his Pieta drawings and statues, a hooded umbilicus, as well as a stunning accuracy for over thirty muscles and bony points with a slight “hyper-anatomised” style as is seen in others of his expressive male body drawings and sculptures."

Following on from this, a team led by Professor Mark Williams from WMG travelled to Cambridge and laser scanned one of the original sculptures to create an exact 3D digital model. This scanner is so accurate it can resolve features to below 100 microns - the same equipment used for scanning highly precise engineering parts, and anatomical scans of the type used for crime investigation.

"It was fantastic to apply our technology to such an exciting project and help shed light on the origin of such beautiful statues. Usually we are working on something engineering-related, so to be able to take our expertise and transfer that to something totally different and so historically significant was a really interesting opportunity”, said Professor Williams.

This high resolution laser scan was then used by Propshop, based at the Pinewood film studios, to create 3D printouts at full-scale and reduced-scale.

Andrew produced moulds from both 3D printouts, and used these to create his replicas, using alloys as close as possible to the originals, and in an old-fashioned furnace of the kind that Michelangelo and his contemporaries would have used.

To understand the mysterious and complex casting process even better, Dr William Griffiths from the Metallurgy and Materials Department at Birmingham University will take real-time X-ray videos while the molten bronze is being poured into the moulds, to record exactly how the liquid metal flows around the mould.

It is hoped that Lacey’s replicas will allow us to better understand how these two Renaissance masterpieces were made, in turn shedding more light on bronze-making in the early 16th century.

The project has been coordinated by Dr Victoria Avery, Keeper of Applied Arts at the Fitzwilliam Museum, she commented:

“It has been wonderful to spear-head further interdisciplinary research into the Rothschild bronzes to better understand how they were made and why they look the way they do. We are hugely grateful to colleagues at the Rijksmuseum’s Department of Conservation and Scientific Research, Warwick University’s Medical School and the Warwick Manufacturing Group, Birmingham University’s Metallurgy and Materials Department, Propshop at Pinewood film studios and the sculptor-caster Andrew Lacey, for their expert help and input in the experimental reconstruction process. Thanks to this novel collaboration between art historians, conservation scientists, anatomists, engineers, prop-makers and artists, and through harnessing state-of-the-art equipment and imaging technologies, we can now reveal that these enigmatic bronzes were manufactured using some rather idiosyncratic working practices, which lends further weight to the early date already suggested by visual and preliminary technical analysis. ”

The results of the technical investigations led by conservation scientists at the Rijksmuseum, as well as the findings and conclusions of Lacey’s reconstructions, will be presented as part of the one-day ‘Michelangelo Discovery’ conference in Cambridge on Monday 6 July.

The bronzes are on display and available to see for free at the Fitzwilliam Museum Cambridge until 9 August 2015. The initial announcement of the research project linking the Rothschild bronzes to Michelangelo was made on 02 February 2015.

• Drawings and other sculpture by Michelangelo show the similarity between the bronzes and the pose, gesture and treatment of anatomy that characterise his work.

• Neutron X-ray imaging reveals the casts to be thick walled and heavy which tends to indicate a late 15th or early 16th century date, as by the 1530s the Italians had mastered the complex art of casting

History of the bronzes

In the 19th century they were in the collection of Baron Adolphe de Rothschild and were claimed to be works by Michelangelo. In the 20th century they were variously attributed to Tiziano Aspetti, Jacopo Sansovino and the circle of Benvenuto Cellini. More recently they were dated to the 1550s and associated with the Dutch sculptor Willem Danielsz Van Tetrode. None of these attributions have stuck. They appeared in the exhibition 'BRONZE' in 2011 at the Royal Academy where David Ekserdjian implied a link to the circle of Michelangelo.

Professor Paul Joannides, Emeritus Professor of Art History at the University of Cambridge, then connected them to a drawing by one of Michelangelo’s apprentices now in the Musée Fabre, Montpellier, France.

A Sheet of studies with Virgin embracing Infant Jesus, c.1508, is a student’s faithful copy of various slightly earlier lost sketches by Michelangelo. In one corner is a composition of a muscular youth riding a panther, which is very similar in pose to the bronzes, and drawn in the abrupt, forceful manner that Michelangelo employed in designs for sculpture. This suggests that Michelangelo was working up this very unusual theme for a work in three dimensions.

This revelation triggered further art-historical research. The bronzes were compared with other works by Michelangelo and found to be very similar in style and anatomy to his works of 1500-1510; a date confirmed by the preliminary conclusions of initial scientific analysis.

The bronzes are currently on loan to the Fitzwilliam Museum from a private collection.