Rather than being everywhere at once, maintaining control and security, it was important for the Romans to built strong relations with the local tribes and elites within their provinces. Local elites were effectively bribed, given power, wealth, office and status on condition that they themselves kept the peace and adopted Roman ways. Becoming part of the Roman Empire also involved the payment of taxes and the draft of men into the Roman army.

A client Kingdom was created when the governing Romans felt that influence without direct rule was desirable. Client kingdoms were ruled by client kings or queens and often represented an entire tribal group. The creation of client Kings from the leaders of the local tribes was exactly what happened with Boudica's Iceni in East Anglia.

Local rulers often adopted Roman names, spoke Latin and lived in a villa - as with many examples throughout history, prestige was often sought through linking oneself to a new and dominant power. While wholesale adoption of Roman ways and beliefs no doubt occurred in some cases, it is better to imagine a process of cultural borrowing and adaptation. The Romano-Britons would have developed their own local culture, an amalgamation of Roman and British customs, ways and beliefs, with local and Roman gods for example sitting side by side in local pantheons, or identified with each other.

An excellent example of the adoption of Roman ways by local elites can be seen in the client King Cogidubnus (or Togibubnus) whose possible palace at Fishbourne near modern Colchester is famous for its spectacular mosaics such as that depicting cupid riding on the back of a dolphin (left).

We know of the King from Tacitus' Agricola 14 where he has the following to say of Cogidubnus (Tacitus calls him Cogidumnus):

"Aulus Plautius was the first governor of consular rank, and Ostorius Scapula the next. Both were famous soldiers, and by degrees the nearest portions of Britain were brought into the condition of a province, and a colony of veterans was also introduced. Some of the states were given to king Cogidumnus, who lived down to our day a most faithful ally. So was maintained the ancient and long-recognised practice of the Roman people, which seeks to secure among the instruments of dominion even kings themselves. Soon after, Didius Gallus consolidated the conquests of his predecessors, and advanced a very few positions into parts more remote, to gain the credit of having enlarged the sphere of government. Didius was succeeded by Veranius, who died within the year. Then Suetonius Paullinus enjoyed success for two years; he subdued several tribes and strengthened our military posts. Thus encouraged, he made an attempt on the island of Mona, as a place from which the rebels drew reinforcements; but in doing this he left his rear open to attack."

An inscription discovered in Chichester in 1723 (a model of which can be seen below) records the following: 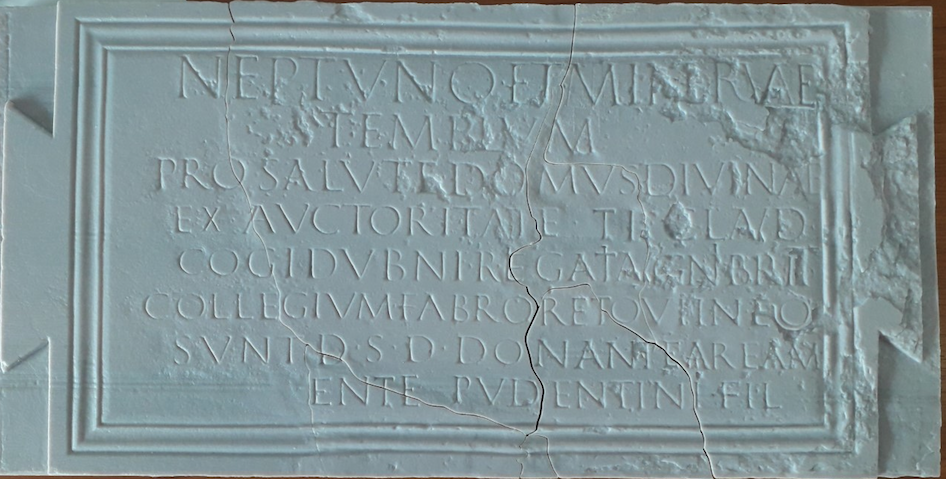 To Neptune and Minerva, for the welfare of the Divine House, by the authority of Tiberius Claudius Cogidubnus, great king of the Britons, the guild of smiths and those in it gave this temple at their own expense ...ens, son of Pudentinus, presented the forecourt.