In 2021 the WCN received funding from the Classical Association and the Warwick Arts Impact Fund to undertake a project with Culture Coventry's Herbert Art Gallery and Museum, and Lunt Roman Fort. Our aim was to create 3D prints and online moveable digital copies of some of the amazing artefacts housed at Lunt Roman Fort. These printed and digital copies will form the heart of a set of school resources which are currently being developed by the WCN. These resources will be available online and the 3D prints will form part of our Travelling Museum resource offering. 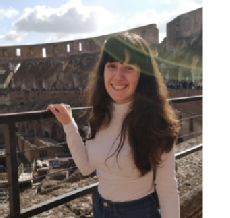 These items also form a part of the resources created by Rebecca Preedy (left) as part of her URSS project.Rebecca's project was to create something that would help local children develop an interest in archaeology and the Romans. In conjunction with the department’s Roman Coventry Project, this will involve the creation of handling boxes in the form of Roman time capsules. Through liaison with the Herbert and Lunt and the scanning outlined on this page, these time capsules will contain real and replica objects associated with Roman Coventry that will be used in schools for hands-on educational sessions. There will also be an online version, with activities associated with the time capsules and the ‘characters’ who created them. Rebecca is hoping that this project will inspire children in the Coventry area to start thinking about the history and archaeology around them in a creative way and encourage their interest in the Roman world.

On Tuesday 6th July 2021, a team from WMG headed by Dr Paul Wilson undertook laser scanning and photogrammetry of Roman artefacts housed at Lunt Roman Fort, for our Roman Coventry Project. The idea was to create both online 3D images of the artefacts for teaching resources using photogrammetry, and laser scanning the items to enable 3D printing of some of the artefacts for travelling artefact lessons. The funding for this amazing project was provided through the generosity of the Classical Association and the Warwick Arts Impact Fund. Our huge thanks go to WMG whose team under Dr Wilson undertook this scanning free of charge, and to the staff at the Herbert Gallery and the Lunt Roman Fort who were on hand to assist - especially to the curator Ali Wells for handling the objects with so much care so that they could be safely scanned by the team.

Here (left) we can see Dr Paul Wilson undertaking photogrammetry of a finial bowl - a fine bowl used for religious rituals and uncovered here at the Lunt. Photogrammetry requires a series of high quality photographs to be taken of an object from many different angles, these separate images then being combined by a computer into a single manoeuvrable 3D image. This image captures in fine detail the shape, colour and texture of the item, and the image can be manipulated online by the viewer and so seen from every angle - something impossible in a Museum setting. The finial bowl here is an especially delicate piece and is much too fragile to be ordinarily handled. Photogrammetry can be undertaken using a normal camera, but specialist software is required to transform the photos into a 3D online representation of the object.

The 3D scans taken here will form part of our online Travelling Artefacts resources, and pupils will be able to study the objects housed at the Lunt in fine detail from home or the classroom, and then will be able to visit the Lunt and see the objects themselves where they were uncovered. Items found at the Lunt are mostly associated with the soldiers who manned the fort, but finds at local Baginton, like beads and brooches, attest to the presence of women nearby.

The second technique for scanning the items was laser scanning, undertaken here by Joseph Benjamin (left) a Metrology Technician at WMG. Here the items are scanned from every angle using a laser, with the information being fed directly into a computer. This method of scanning allows fine details of the surfaces to be recorded along with the contours of each artefact. The data recorded using this intricate technique can then we used to create 3D printed models of the artefacts. In this way, artefacts too rare or intricate to be handled can be printed and then taken in to the classroom.

We are planning to print some copies of a grey ware pot on display at the Lunt as part of our Roman time-capsules project undertaken by our Warwick Classics student Rebecca Preedy for her URSS project. Smaller items such as a brooch and pieces of armour will be placed inside the pots and will build up a picture of the types of individuals who may have lived in around the fort in Roman times.

Below you can see close-ups of the finial bowl being scanned. In the second image (right) you can see the computer image being built up as the object is scanned. Each of the scans of the object are compiled by the computer into a single high quality 3D representation of the object which can then be used as the base for the 3D printing. The printing itself can be done with a variety of materials, and we are very excited at the possibility of printing out a large version of an inscribed intaglio gem with an image of the Roman goddess Fortuna holding an oar and cornucopia. Too small to easily see with the naked eye, we are hoping to print a large copy in resin to display beside the actual gem.

A short video of the scanning can be watched here.