In AD 44 the invasion force headed for Camulodunum, the Iron Age precursor of modern Colchester. Here they received the submission of British tribal leaders and the Roman conquest of Britannia was begun. Thus the first legionary fortress in Roman Britain was Camulodunum (Colchester), the capital of the Trinovantes. 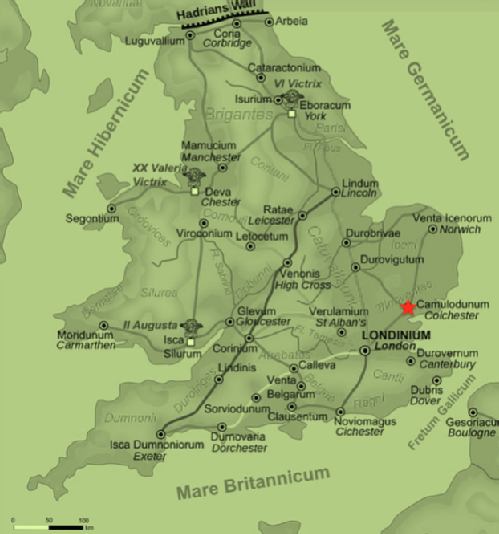 It is thought that Legio XX (the 20th legion) built the fortress within what is now Colchester town centre and occupied it until AD 49. In AD 49, Legio XX moved on, and the buildings of the fortress were converted for use in the Roman civilian town which was founded here in AD 49. The town was settled with Roman army veterans - possibly some from the XX Legion itself.

Boudica was to destroy Camulodunum in AD 60. Were veterans of the XX still stationed there when Boudica attacked? Most probably. As such, the legionaries of the XX Legion who fought against Boudica at the Battle of Watling Street in AD 61 may have been motivated by personal revenge for their ex-colleagues fallen at Camulodunum.

By taking part in the invasion and settlement of Camulodunum, the XX Legion were involved in the war against the the rebel British leader Caratacus.

Caratacus was named by the Roman historian Cassius Dio as a son of the Catuvellaunian king Cunobelinus. Claudius' initial invasion of Britain had focused on Caratacus's stronghold of Camulodunon (modern Colchester), previously the seat of his father Cunobelinus.

Cunobelinus had died some time before the invasion. Caratacus and his brother Togodumnus led the initial defence of the country against Aulus Plautius's four Roman legions, thought to have been around 40,000 men, primarily using guerrilla tactics. They lost much of the south-east after being defeated in two crucial battles, the Battle of the River Medway and River Thames. Togodumnus was reportedly killed (according to Cassius Dio), but it is just possible that he survived and became the king known to the Roman historian Tacitus as Cogidubnus or Togidubnus, a good Roman ally.

The Catuvellauni's territories were conquered, and their stronghold of Camulodunon was converted into the first Roman colonia in Britain, Colonia Victricensis (Colchester).

We next hear of Caratacus in Tacitus's Annals, leading the Welsh tribes of the Silures and Ordovices against Aulus Plautius's successor as governor, Publius Ostorius Scapula. In AD 51, Scapula managed to defeat Caratacus in a set-piece battle somewhere in Ordovician territory, capturing Caratacus's wife and daughter and receiving the surrender of his brothers. Caratacus escaped, and fled north to the lands of the Brigantes (modern Yorkshire) where the Brigantian queen, Cartimandua, handed him over to the Romans in chains. With the capture of Caratacus, much of southern Britain from the Humber to the Severn was pacified and garrisoned throughout the 50s.

Legends place Caratacus' last stand either at Caer Caradoc near Church Stretton or British Camp in the Malvern Hills, but Tacitus ' description fits neither [Annals 12.33]:

The army then marched against the Silures, a naturally fierce people and now full of confidence in the might of Caractacus, who by many an indecisive and many a successful battle had raised himself far above all the other generals of the Britons. Inferior in military strength, but deriving an advantage from the deceptiveness of the country, he at once shifted the war by a stratagem into the territory of the Ordovices, where, joined by all who dreaded peace with us, he resolved on a final struggle. He selected a position for the engagement in which advance and retreat alike would be difficult for our men and comparatively easy for his own, and then on some lofty hills, wherever their sides could be approached by a gentle slope, he piled up stones to serve as a rampart. A river too of varying depth was in his front, and his armed bands were drawn up before his defences.

Caratacus was taken as a prisoner to Rome and paraded through the city as part of the Roman Triumph. Defeated leaders were often publically strangled, but Tacitus [Annals 12.37] reports the following for Caratacus:

When he was set before the emperor's tribunal, he spoke as follows: "Had my moderation in prosperity been equal to my noble birth and fortune, I should have entered this city as your friend rather than as your captive; and you would not have disdained to receive, under a treaty of peace, a king descended from illustrious ancestors and ruling many nations. My present lot is as glorious to you as it is degrading to myself. I had men and horses, arms and wealth. What wonder if I parted with them reluctantly? If you Romans choose to lord it over the world, does it follow that the world is to accept slavery? Were I to have been at once delivered up as a prisoner, neither my fall nor your triumph would have become famous. My punishment would be followed by oblivion, whereas, if you save my life, I shall be an everlasting memorial of your clemency.

Andrew Birrell (after Henry Fuseli), Caractacus at the Tribunal of Claudius at Rome (1792)

So the Emperor Claudius freed the captive Caratacus and his family and they lived on in Rome.

After AD 48, the XX Legion was stationed at Glevum, (Kingsholm in modern Gloucester) and in AD 57, it moved to Usk. It was from Usk that they set out to help defeat Boudica somewhere near the meeting place of the Fosse Way and Watling Street, somewhere in the vicinity of Coventry. 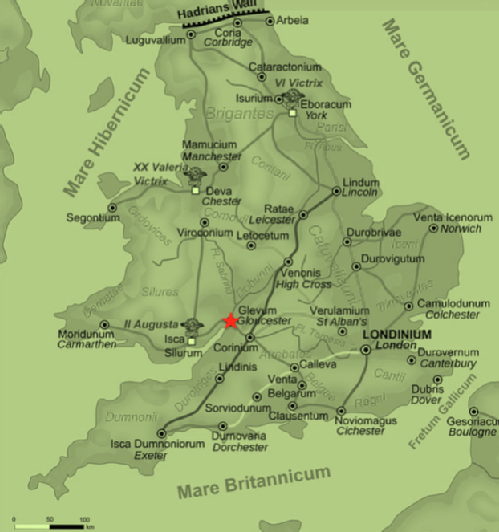 Our only source of the events comes from Tacitus and Dio Cassius. They tell us that the XX Legion were helping Suetonius in Mona (Anglesey) and so made their way down from North Wales to the meeting place with Boudica. Whether the whole legion was there is unclear, or if a detachment may have travelled from Usk to the battle. If so, their route would have been via Glevum (Gloucester) and Corinium (Cirencester) and then up the Fosse Way as below. 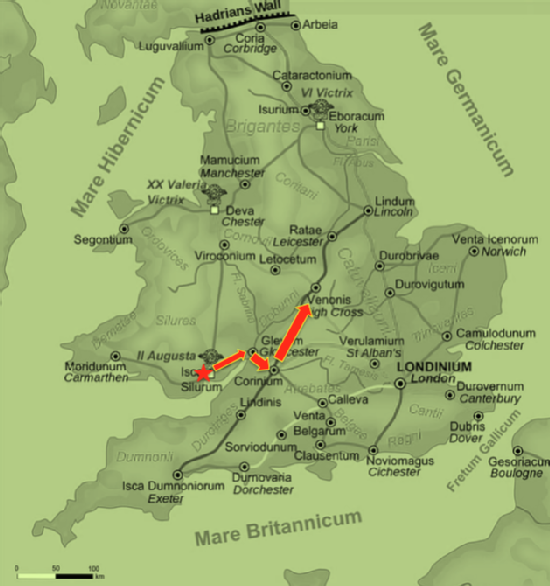 It is possible that the Twentieth received its surnames Valeria Victrix as rewards for its courageous behaviour in this battle, but the presence of a ring with a palm (victory) and XX either side already at Lunt Roman Fort may suggest the presence of legionaries from the XX around the time of the battle and a possible earlier earning of the Victrix title, although much about this remains unclear.

In the civil war of the year AD 69, the XX Legion sided with the emperor Vitellius (in what was later referred to as the Year of the Four Emperors). Several subunits took part in his march on Rome, and returned after the victory of Vespasian.

In AD 75, XX Valeria Victrix was transferred to Viroconium (Wroxeter), from where, governor Gnaeus Julius Agricola led it to the north as part of his campaigns in the Scottish highlands (AD 78-84). At the same time, VIIII Hispana launched its offensive from York; the two armies met at Stanwick, where they caught the warriors of the Brigantes in a pincer movement. From now on, northern England was part of the Roman empire. 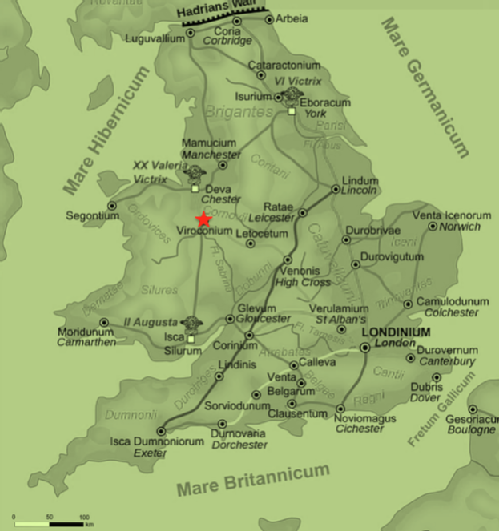 During the campaigns (AD 78-84) the XX Legion was temporary garrisoned at Carlisle, and finally moved to Inchtuthil in Perthshire. 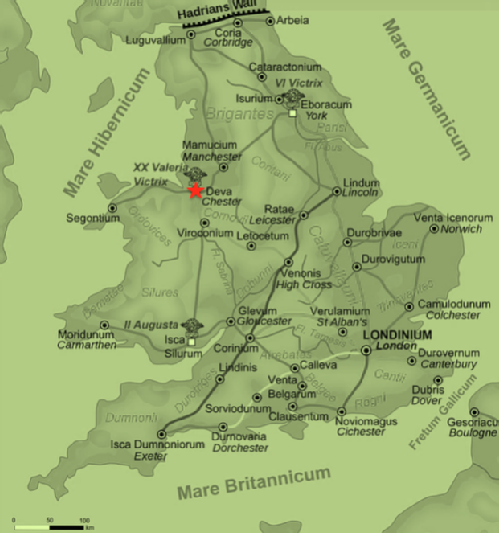 In AD 88, the Legion was ordered to return to England, where it found a new base at Deva, modern Chester. Deva had been built by II Adiutrix legion but was now rebuilt from stone and bricks, which were prepared in a nearby town called Holt. 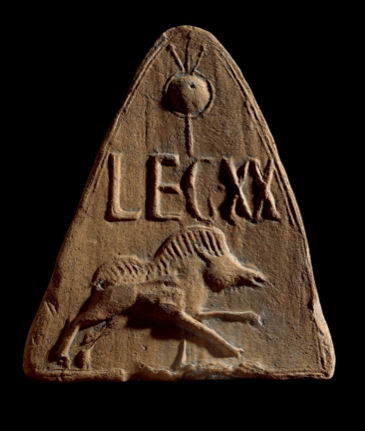 Moulded antefix roof tile showing the badge and standard of Legion XX, from Holt, Clwyd, Wales – linked to when in Chester - from British Museum

At the same time (AD 83), at least one unit of XX Valeria Victrix took part in the campaign against the Germanic Chatti of the emperor Domitian. Following this, we know that soldiers of the XX Legion were active in the construction of Hadrian's wall (AD 122-125) and the Antonine wall (ca. AD140). We have carved examples of the boar of XX Valeria Victrix from the fort of Vindolanda, just south of Hadrian's Wall: 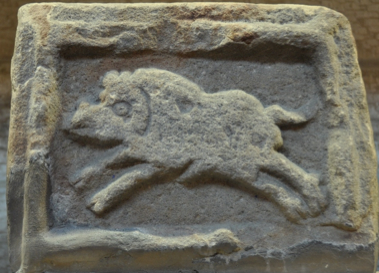 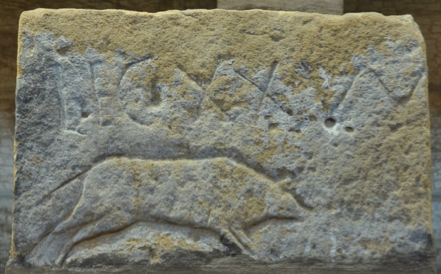 In the years between AD 155 and 158, a widespread revolt occurred in northern Britain, requiring heavy fighting by the British legions. They suffered severely, and reinforcements had to be brought in from the two Germanic provinces.

It is from around this time or that at Hadrian's Wall that a man whose grave now lies in Rome must have served with the XX legion. 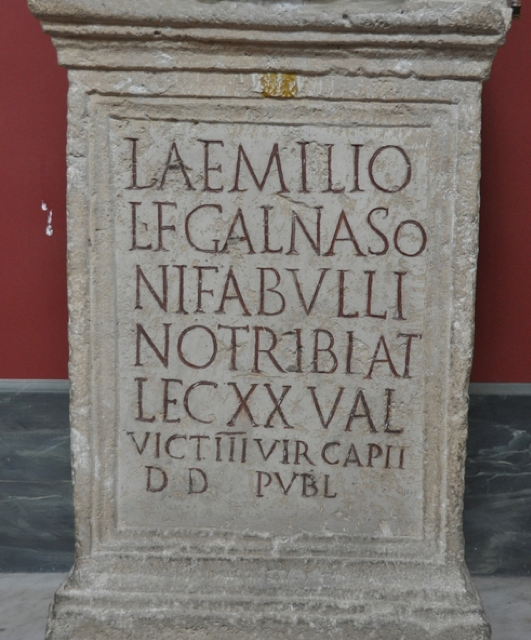 To Lucius Aemilius Naso Fabullinus, son of Lucius, of the Galerian voting-tribe, wide-stripe senatorial tribune of the Twentieth Legion Valeria Victrix, triumvir in charge of capital sentences, at public expense, by decree of the town-councillors.

In AD 196, governor Clodius Albinus of Britannia attempted to become emperor. The British legions were ferried to the continent, but were defeated by the lawful ruler Lucius Septimius Severus in the spring of 197. When the legions returned to their island, they found the province overrun by northern tribes. Punitive actions did not deter the tribesmen, and in AD 208 Septimius Severus came to Britain, in an attempt to conquer Scotland. XX Valeria Victrix may have fought its way up north along the west coast, but returned home to Deva (Chester) during the reign of Severus' son Caracalla (AD 211-217). However, the legion had behaved courageously and was awarded the surname Antoniniana.

While at Hadrian's Wall, Septimius Severus (himself from North Africa) is said to have met with an Ethiopian soldier in an encounter that we discuss in our section on Diversity in the Roman Army.

Between AD 249-251, the XX Legion was briefly called Deciana, after the emperor Decius. This also suggests some sort of courageous behaviour, although the details are unknown. In AD 255, a subunit was fighting in Germania and, after its victory, was sent to the Danube.

The legion was still active during the reign of the usurpers Carausius and Allectus (AD 286-293 and 293-296), but is not mentioned in the fourth century. Perhaps it was disbanded when the Roman emperor Constantius I Chlorus reconquered Britain.

A Tale of Tiberius, Legionary of the XX

During the second half of the Second Century AD and first years of the Third, one Tiberius Flavius Virilis is known to have served in three British legions including the XX in Britian, another in Africa and one final legion in Italy in a career spanning forty-five years. His British wife Lollia Bodicca (!) buried him in Algeria aged 70. Lollia's surname may be linked to Boudica, but it might also refer to the etymology of the name meaning 'victory' or 'victorious'. A good name for the wife of a legionary of the Valeria Victrix.

Where was Tiberius from? Was he perhaps British? There is a good chance that he was. The following is the inscription from his grave (CIL VIII. 2877) in Algeria: 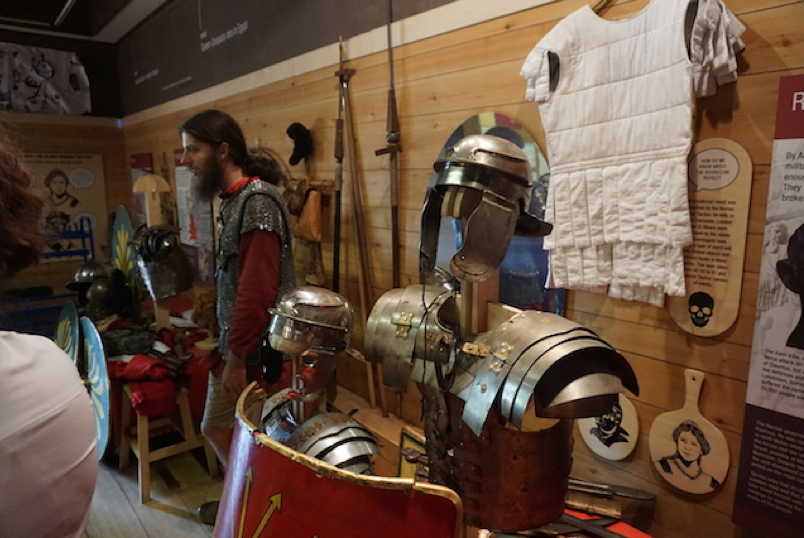