Tuesday, the 10th of May

In this session, we will be discussing histories of drinking, both alcoholic and non-alcoholic, with two readings voted on by our members:

For our next meeting, I would like to discuss the global movement of foods and the processes by which a global commodity becomes local. To do this, I suggest two articles:Kathleen E. Kennedy, 'Gripping It by the Husk: The Medieval English Coconut', The Medieval Globe, Volume 3 (2017), pp. 1-25

Ty Matejowsky, 'SPAM and Fast-food “Glocalization” in the Philippines', Food, Culture & Society, Volume 10 (2007), pp. 23-41The first article perhaps drifts closer to a material culture study than a food history, but I think is an interesting piece on global foods in the Middle Ages (a period understudied in this respect, and one we don't often touch on!), and I think is an interesting piece to reflect on how our presumptions of what food belongs where influences the writing of food history. The second article is a piece on the same process, but in a very different modern context´and from West to East, and provides interesting food for thought on 'glocalization' and cultural perceptions of foodstuffs. They also (incidentally) both draw on the lasting influence of Monty Python.

Convenor: Daniel Gettings
I feel that most of us would agree (and the existence of the reading group somewhat implies) that all food has greater meaning than its mere nutritional value. There are times however, that specific food stuffs are imparted with additional significance based on social, cultural, and religious beliefs and practices. In this session, the readings provided offer a window into two examples over both an early modern and very modern context.
Susan D. deFrance, "Guinea Pigs in the Spanish colonial Andes: Culinary and Ritual Transformations", International Journal of Historical Archaeology, 25 (2021) pp. 116-143.
Angela R. Piergiovanni, "Legumes: staple foods used in rituals and festive events of Apulia region (southern Italy)", Food, Culture & Society 24:4 (2021) pp. 543-561.

We will discuss John Hayes' 'Influence of Sensation and Liking', a paper that discusses the relationship between the flavours and sensations of the food we eat and its impact on our consumption choices, after which we will have lunch together.
Wednesday, the 27th of October.
11:30-13:00
Venue: H0.43
Convenor: Shrikant Botre

In this session, we will talk about the relationship between food and technology in the 19th century West. The set of articles explore how technologies related to food production and cooking shaped and were shaped by socio-political and economic situations of the time. Ian MacLachlan examines the British discourse around slaughter tools in reference to humanitarian arguments, private versus public abattoirs, class politics, and the state. Focused on America, Priscilla Brewer shows how the invention and circulation of the cooking stove and subsequent changes in its manufacturing were intertwined with gendered realities of labour in kitchen management, industrial economy, and nostalgic notions of domesticity.

In our next session we will be discussing food and religion, with chapters 2, ‘‘The Foods of a Christian’: Food, Religion, and Inquisition’ (pp. 13-34), and 4, ‘‘The Eaters’: Fast-Breaking Protest in Reformation Zürich’ (pp. 53-75), of the book Food, Religion and Communities in Early Modern Europe (Bloomsbury, 2018), by Christopher Kissane (with the author).

In this session, we will talk about the late nineteenth-century Western politics of meat.

1) Keir Waddington, '"Unfit for Human Consumption": Tuberculosis and the Problem of Infected Meat in Late Victorian Britain', Bulletin of the History of Medicine, Volume 77, Number 3, Fall 2003.

Both articles in different ways elucidate how politics around unwholesome meat was crucial to conceptualising public health agendas in the modern West. Respectively situated in late Victorian Britain and late nineteenth-century German - American conflict, these histories demonstrate how the pathology of meat evolved at the intersection of medical expertise, state bureaucracy, media, and the body.

In this session we will be discussing food and nationalism. The text ‘food, national identity and nationalism’ explores briefly the different ways in which food and nationalism operate together. The second reading is a case study about the strong relationship between food and nation-building during the dictatorship of Primo de Rivera (1923-1930) in Spain. I have picked this case study because it links very closely to my area of research and because it is one of the first (if not the first) studies that explores the role of food on Spain’s first dictatorship in the twentieth century (usually overshadowed by Francoism). I believe that the impact of top-down nationalism and the promotion of Spain as a united but diverse nation through food can still be seen today in Spain, especially in forms of unofficial or bottom-up nationalism and every-day-nationalism (Masterchef and the celebration of the Spanish omelette as a national dish being a clear example). It would be interesting to know how food and nationalism operates in each of your countries or nations!

In this session we will be discussing long term changes in the attitudes towards and understandings of specific food and drink products across the Early Modern and into the Modern period. I think there is interesting discussion to be had about these changes and the different causes the authors ascribe to them from the rise of empire, to the 'commodification' of the natural world, to sensory changes in smell and taste.

Both pieces attempt to cover long time periods, 3 centuries and 5 centuries respectively. I therefore feel there is some historiographical discussion to be had on how effective/complete the group feels pieces like these can be when they attempt to cover such a long period in 20 pages.

In this session we will discuss gendered notions of dieting and weight loss in twentieth-century America and Britain. I think there is some interesting discussion to be had around the impact of gender on relationships with food and alcohol, particularly when linked to 'self-control', weight loss, and health. Ironically, for a food and drink group, these readings are perhaps more about the choice not to consume!
1) Avner Offer, 'Body Weight and Self-Control in the United States and Britain Since the 1950s', Social History of Medicine 14:1 (2001), pp. 79-106.
2) Tanfer Emin Tunc, 'The "Mad Men" of Nutrition: The Drinking Man's Diet and Mid-Twentieth-Century American Masculinity', Global Food History 4:2 (2018), pp. 189-206.

In this session, we will discuss the relationship between gender, class, nation, and the science-ing of food in the modern West. In this session, we would like to talk about how dominant sections of the society interpreted specific foods/beverages to restructure the relations of power in modern times.
The two articles that we will discuss are:
1) Daniel Block (2005), 'Saving Milk Through Masculinity: Public Health Officers and Pure Milk, 1880–1930', Food and Foodways, 13:1-2, pp.115-134.
The article shows how public health agendas of protecting and science-ing milk in the US, functioned as a process of masculinizing milk.
2) Ian Miller (2013), 'A Dangerous Revolutionary Force Amongst Us', Cultural and Social History, Volume 10, Issue 3, pp. 419–438.
This article demonstrates how tea became a medium for the British medical practitioners and non-medical press to superimpose middle- class' projections about social and national decline onto the working-class men and women's everyday alimentary practices.

In this session, we will discuss food and identity. We will talk about food as a means of creating national identities, both for one's own nation and as a form of 'othering'.

The first is by Hans Martin Krämer: '"Not Befitting Our Divine Country"; Eating Meat in Japanese Discourses of Self and Other from the Seventeenth Century to the Present', Food and Foodways, vol. 16 (2008). This article discusses the modern and early modern formation of a 'traditional' Japanese cuisine as a form of nation building, involving the exclusion of a history of meat consumption in order to distinguish themselves from China and 'the West'.

The second, 'Bad Bread and the "Outrageous Drunkenness of the Turks": Food and Identity in the Accounts of Early Modern European Travelers to the Ottoman Empire', Journal of World History, vol. 25 (2014), by Eric C. Dursteler, which discusses how Europeans used food practices in order to present Turkish culture as the barbaric 'Other'.

In this session, we will discuss gender and the production of knowledge on food and drink in different cultures.

The first one is from historian Sara Pennell, 'Perfecting Practice? Women, Manuscript Recipes and Knowledge in Early Modern England', in Victoria E. Burke and Jonathan Gibson (eds),Early Modem Women's Manuscript Writing(Aldershot,2004). This article examines the particular character of women's culinary knowledge, and the relationship between cookery as a form of practicable knowledge with recipes as its chief medium, and the status of such knowledge in the early modem European culture of experimentation and the 'new' natural and chemical philosophy.

Another piece is from Jin Feng, a professor in literature, ‘The Female Chef and the Nation: Zeng Yi's "Zhongkui lu" (Records from the kitchen)’, Modern Chinese Literature and Culture, Vol. 28, No. 1 (srping, 2016). This article focuses on Zeng Yi(曾懿)(1852-1927), a ‘talented women’(cainü才女) in late Qing and her published cookbook Zhongkui lu（中馈录）. It examines the ways in which Zeng Yi used cookbook to mediate between traditional gender norms and Western knowledge in late Qing, when China was under threats from imperial powers. Sadly, there is very limited historical research on Chinese women’s recipe writings. This article is among the very few in English. I hope this article can give you an introduction to gender and culinary knowledge in China.

Ricardo selected these two readings because he would like to bring to the group the discussion about pre-industrial era foodways. Both authors emphasise the importance of biology in the food production, circulation and consumption. Alfred W. Crosby J. was the first to outline the importance of biology in the understanding of social phenomena. His The Columbian Exchange… explores the ecological foundations of social change and adaptation. In ‘New World Foods and Old World demography’ he investigates the American edibles that were exported from XVI to XX centuries, and the consequences that this globalisation of crops brought about for Old World demography.

David Lentz’s study ‘Anthropocentric food webs…’ is largely concerned with one key concept: trophic web (s). According to Lentz, a complex chemical and microbiological connexion occur between animal and plant species that allows the proliferation of crops. In order to obtain key nutrients, domesticated plants, like maize, had a symbiotic relation with weeds and beans. Hence, the text serves to pose questions related to the use of uncultivated plants in crop production and their incorporation to diets; also, it calls for the answer to question of what the role (active/passive) of humankind is in relation with edibles production and consumption, to name a few. 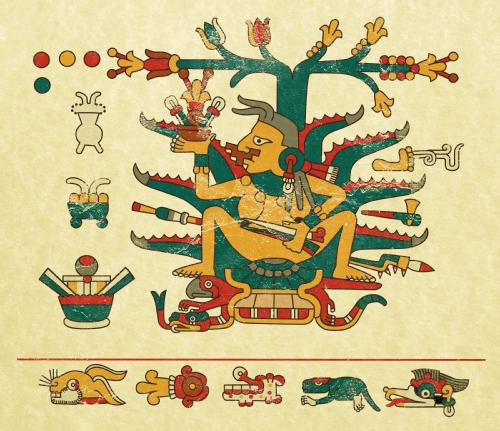