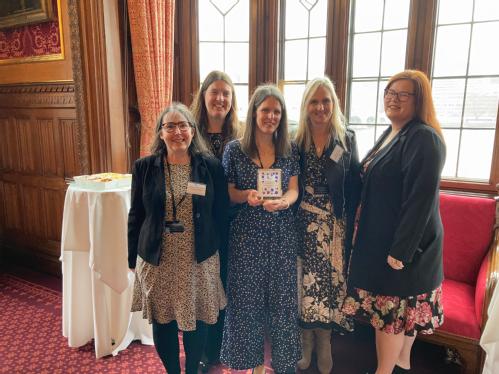 A Coventry community language project involving the city’s schools, universities, local council, businesses and MPs has been named Parliament UK Community Campaign of the Year in the Your UK Parliament Awards 2022.

The Coventry City of Languages project aims to celebrate and promote all the languages spoken in the city of Coventry. Representatives from the team were presented with their trophy at the Palace of Westminster, where they met with Coventry’s MPs Taiwo Owatemi and Zarah Sultana, who have supported the partnership.

Professor Kate Astbury, head of the School of Modern Languages and Cultures at the University of Warwick, said:

“We are delighted to be able to support the Coventry City of Languages is playing a vital role in answering calls for a multilingual, global Britain. Staff and students from the SMLC helped launch the initiative last autumn and we are thrilled that this award recognises the success we are already seeing.”

Coventry City of Languages was founded in January 2021 by teachers Anna Grainger and Victoria Seaton to celebrate the many languages spoken in schools and communities across the city and inspire everyone to develop their language skills.

“We hope that this award will enable us to give a louder voice to all those people who speak other languages in our city, and draw attention to the linguistic diversity and the benefits this brings. Language education in the UK is at crisis point. A 2019 report by The National Academy estimates that the UK economy loses out on £48 billion a year due to the lack of language skills in the workplace, and this is only going to get worse.”

Coventry City of Languages campaigns for greater visibility of languages in the city and aims to encourage school pupils to develop a love of language learning, and work more effectively with Ethnic Minority Achievement Service to celebrate the advantages of multilingualism. The project has the support of the Lord Mayor, City Cabinet member for education Counsellor Kindi Sandhu, local MPs Zarah Sultana and Taiwo Owatemi, and the British Council.

The partnership has already expanded the number of teachers supported through a Modern Foreign Languages hub and helped the Spanish Embassy to deliver high quality training to primary school teachers at an event hosted by the SMLC. SMLC students have run competitions for primary and secondary school pupils, delivered talks in schools, and created virtual school trips abroad to level up language learning at a time when school trips abroad have been halted because of the pandemic.

Hispanic Studies/ Centre for the Study of the Renaissance Research Seminar: Edward Wilson-Lee (University of Cambridge): 'Hernando Colón and the Quest for a Universal Library'

WWIGS: Marlene Gallner on 'The Leftist Self-Betrayal: Jean Améry's Essays on Antisemitism, Anti-zionism, and the Left

'Soft weapons' and hard lives: fictions of self in transnational Italian life narratives