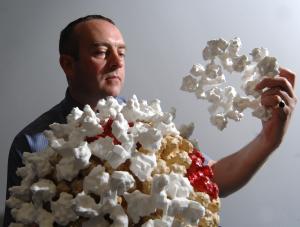 A large 3D model of the Blue Tongue virus has been created by WMG engineering researchers at the University of Warwick that will help biologists devise new ways to combat the virus and protect millions of livestock from infection.

The WMG  University of Warwick researchers based their model on data provided by the Institute of Animal Health at Pirbright, and from Oxford University. The Warwick  team used rapid prototyping technology, normally used to create highly accurate 3D copies of components for a range of manufacturing processes, to create an accurate 3D model virus that is 5,200,000 times the size of the real thing.

Dr Greg Gibbons, who leads the University of Warwick’s WMG’s rapid prototyping team, is working with Professor Peter Mertens, head of the Arbovirus Research Group at the Institute of Animal Health at Pirbright, and Robert Esnouf of Oxford.

Dr Gibbons said: “Research collaboration between engineers and biologists is rare although we have worked with Oxford and the IAH before. The physical model we’ve created is based on the same technology we use to quickly and cheaply create models of, for example, car parts; used by manufacturers to develop designs and test products before going into full-scale production.”

The insect-borne virus is most commonly seen in the late summer and autumn and can devastate herds of sheep and cattle.

Professor Mertens said: “Blue Tongue represents the worst threat to agriculture this country has seen for 20 years. In its first year in Belgium it wiped out 100 sheep, but in its second year it wiped out 30,000. In Britain we have 34 million sheep – we could be looking at losing up to 20 per cent of that population.”

“I don’t know of any other way to create a scientifically accurate model of a virus. By using the computer models we’ve generated we can feed that information into the machines at WMG and create an absolutely perfect model of the real virus.”

“The model will help us to understand how the molecules and proteins interact with one another and this could help us to develop new anti-viral drugs. Having a physical model that you can pick up and peer at will make a huge difference.”

The Blue Tongue model will be on show at the Royal Society’s Summer Science Exhibition in London from 30 June to 3 July.

Images: Dr Greg Gibbons, University of Warwick with the Model