The functional differences between autistic and non-autistic brains have been isolated for the first time, following the development of a new methodology for analysing MRI scans.

Developed by researchers at the University of Warwick, the methodology, called Brain-Wide Association Analysis (BWAS), is the first capable of creating panoramic views of the whole brain and provides scientists with an accurate 3D model to study.

The researchers used BWAS to identify regions of the brain that may make a major contribution to the symptoms of autism.

BWAS does so by analysing 1,134,570,430 individual pieces of data; covering the 47,636 different areas of the brain, called voxels, which comprise a functional MRI (fMRI) scan and the connections between them.

Previous methodologies were process this level of data and were restricted to modelling only limited areas.

The ability to analyse the entire data set from an fMRI scan provided the Warwick researchers the opportunity to compile, compare and contrast accurate computer models for both autistic and non-autistic brains.

Led by BWAS developer Professor Jianfeng Feng, from the University of Warwick’s Department of Computer Science, the researchers collected the data from hundreds of fMRI scans of autistic and non-autistic brains. 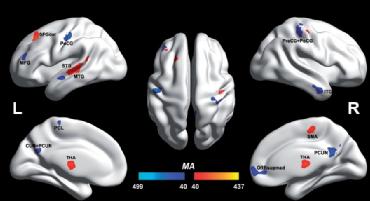 By comparing the two subsequent models the researchers isolated twenty examples of difference, where the connections between voxels of the autistic brain were stronger or weaker than the non-autistic[1].

“We identified in the autistic model a key system in the temporal lobe visual cortex with reduced cortical functional connectivity. This region is involved with the face expression processing involved in social behaviour. This key system has reduced functional connectivity with the ventromedial prefrontal cortex, which is implicated in emotion and social communication”.

The researchers also identified in autism a second key system relating to reduced cortical functional connectivity, a part of the parietal lobe implicated in spatial functions.

They propose that these two types of functionality, face expression-related, and of one’s self and the environment, are important components of the computations involved in theory of mind, whether of oneself or of others, and that reduced connectivity within and between these regions may make a major contribution to the symptoms of autism.

The researchers argue that the methodology can potentially isolate the areas of the brain involved with other cognitive problems, including Obsessive Compulsive Disorder, ADHD and schizophrenia.

By using meta-analysis and a rigorous statistics approach the Warwick researchers were able to collect and use a big data set to obtain significant results, the likes of which have not been seen in autistic literature before. Professor Feng explains:

“We used BWAS to analyse resting state fMRI data collected from 523 autistic people and 452 controls. The amount of data analysed helped to achieve the sufficient statistical power necessary for this first voxel-based, comparison of whole autistic and non-autistic brains. Until the development of BWAS this had not been possible.

“BWAS tests for differences between patients and controls in the connectivity of every pair of voxels at a whole brain level. Unlike previous seed-based or independent components-based approaches, this method has the great advantage of being fully unbiased in that the connectivity of all brain voxels can be compared, not just selected brain regions.”

The research, published in the journal Brain, is titled ‘Autism: Reduced Connectivity between Cortical Areas Involved with Face Expression, Theory of Mind, and the Sense of Self’.

[1] See attached diagrams and tables. Areas isolated in which the connections in the isolated areas are coloured Blue are weaker in the autistic model with Red areas