Councillor Michael Coker has chosen to make a donation of £3,000 to the University of Warwick’s Diabetes research groups and a similar amount of £3,000 to South Warwickshire Diabetes UK from his charitable fund.

The money has been raised over the last year through local events including a golf day at Kenilworth Golf Club.

Cllr Coker said: “It is a pleasure to hand over the money to such a worthy cause. The diabetes research conducted by the University of Warwick is an example of some of the good work conducted at the University’s Medical School.” 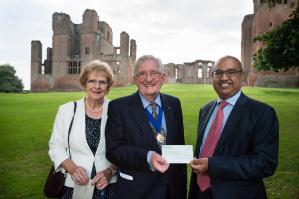 The donation was officially made at the current Mayor, Cllr Richard Davies’ reception at Kenilworth Castle on Tuesday 13 September. The cheque was received by Professor Sudhesh Kumar, Dean of Warwick Medical School who is also a diabetes researcher.

Professor Kumar said: “We are delighted to receive recognition from Councillor Coker. We will be adding some funds to the donation to allow us to purchase specialist equipment called GeneGnome which will be used in our research. The Midlands has the highest rates of type 2 diabetes in Europe and this generous gift will help us continue our work.

“Warwick Medical School undertakes research into diabetes and a number of trials into the disease take place through hospitals in our region, and so this funding will really make a difference to our local community.”

“We have numerous on-going research projects and this donation will be a great benefit to our researchers who are working hard to translate new developments into meaningful improvements in diabetes care for patients. The Medical School will add some further funds to this donation and use the funds to buy a new equipment that will be used by many researchers enabling them to do their work more efficiently with new technology”

Diabetes is estimated to affect more than 285 million people globally, with the prevalence expected to increase to 438 million people by 2030. Warwick Medical School’s research has provided key insight into diabetes particularly with an emphasis on ethnicity-related health issues, informing national practice and having a positive on the treatment of such as diabetes, and the subsequent complications.

Tackling diabetes early is important to prevent its many complications. One of these complications is the increased risk of retinopathy (damage to the retina which can lead to blindness). Retinal screening research conducted at the University directly influenced the decision to develop and fund a UK-wide National Screening Programme which has saved the sight of many diabetic patients. The NHS is now the global leader in this form of screening.

In addition Warwick Medical School has collaborated with national bodies and UK government to produce national programmes for tackling obesity which is linked to diabetes.

Councillor Coker added: “Diabetes affects the lives of so many including young people and their families. I hope my donations to the University and Diabetes UK will encourage others to give to such a good cause.”

Photo caption: Former Mayor of Kenilworth Michael Coker and his wife Janice present a cheque for £3,000 to the Dean of Warwick Medical School Sudhesh Kumar to help with diabetes research.