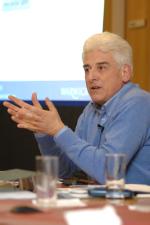 A paper published in the BMJ Open journal and led by Warwick Medical School suggests social inequalities in salt intake have hardly changed in the period from 2000-01 to 2011. This is despite a national average salt reduction over this time.

This paper is the first to monitor social inequalities following the national salt reduction programme. The research was carried out by the World Health Organization Collaborating Centre for Nutrition, based at Warwick Medical School, University of Warwick.

Researchers looked at the geographical distribution of habitual dietary salt intake in Britain and its association with manual occupations and educational attainments, both indicators of socio-economic position and key determinants of health.

The researchers used the British National Diet and Nutrition Survey (2008-11), a national representative sample of 1,027 men and women aged 19-64 years living in Britain. Salt intake was assessed with a 4-day food diary, assessing salt consumption from food. Salt added by consumers at the table and during cooking (discretionary salt) was not measured.

Professor Francesco Cappuccio, senior author and Director of the WHO Collaborating Centre, said: “Whilst we are pleased to record an average national reduction in salt consumption coming from food of nearly a gram per day, we are disappointed to find out that the benefits of such a programme have not reached those most in need. These results are important as people of low socio-economic background are more likely to develop high blood pressure (hypertension) and to suffer disproportionately from strokes, heart attacks and renal failure.”

Professor Cappuccio continued: “The diet of disadvantaged socio-economic groups tends to be made up of low-quality, salt-dense, high-fat, high-calorie unhealthy cheap foods. We have seen a reduction in salt intake in Britain thanks to a policy, which included awareness campaigns, food reformulation and monitoring. However, clearly poorer households still have less healthy shopping baskets and the broad reformulation of foods high in salt has not reached them as much as we would have hoped.”

“In our continued effort to reduce population salt intake towards a 6g per day target in Britain, it is crucial to understand the reasons for these social inequalities so as to correct this gap for an equitable and cost-effective delivery of cardiovascular prevention”, Professor Cappuccio concluded.