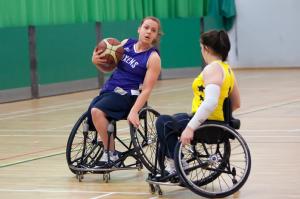 This Sunday (February 20) will see some fast, frenetic and furious action in the Sports Hall of University of Warwick as the best women wheelchair basketball players from across the country compete.

The National Women’s League will see eight teams from across the UK, including Team GB, battle it out for a place in the Championship Finals in May.

GB women’s team will also be using the event as training as they continue to prepare for their biggest stage, London 2012.

Sports fans are being invited along to watch the frantic action for free and catch a glimpse of next year’s Paralympic stars.

Gemma Morris, Warwick Sport Manager, said:  “We are very much looking forward to once again hosting another round of the National Women’s League and building a partnership with British Wheelchair Basketball for potential future events.

“It is also a great opportunity for students and staff of the University to watch some of the best players in the country.”

British Wheelchair Basketball’s Women’s Development Officer, Helen Goss, added: “This is a really exciting time for wheelchair basketball in the run up to London 2012, with the women’s game improving in standard all the time.

“We are very lucky to have partnered up with the University of Warwick as it allows us to widen wheelchair basketball’s appeal to a new audience and we hope that people will take this opportunity to come and sample a taste of the sport.”

The action takes place between 10am-6pm. Anyone wanting to come along and watch should park in Car Park 8, opposite the Sports Hall, on University Road.

Images are available by logging on to http://www2.warwick.ac.uk/services/communications/medialibrary/images/february2011/wba_2950_vixens_v_blues.jpg