Lunt Roman Fort in Baginton was a Roman military camp created in around AD 60 or 61 to deal with the revolt of Boudica and/or its aftermath. We have no record of the Lunt from Roman times or what it was called - the name Lunt was introduced later and refers to trees or a wooded slope - so our knowledge comes entirely from archaeology and from how other similar sites were governed and worked.

The extent of the Fort and some of its features can be seen in this spectacular drone footage recorded in July 2021 thanks to Culture Coventry and fireFLY Aerial Innovation. The Romans here are re-enactors from the groups Britannia and The Vicus, alongside the Lunt's resident Romans Rufus and Gnaeus (Richard and George).

The site of Lunt Roman Fort was identified when large quantities of Roman pottery were found in the 1930s during gravel-working in the village of Baginton. In the 1960s, Brian Hobley, keeper of field archaeology at the Coventry Museum, started a long-term project to combine excavation with a study of the methods by which Roman camps were built. Archaeological excavations identified four distinct periods of occupation of the Roman military site which will be discussed in the section on Development and History.

What do we mean by a Fort? 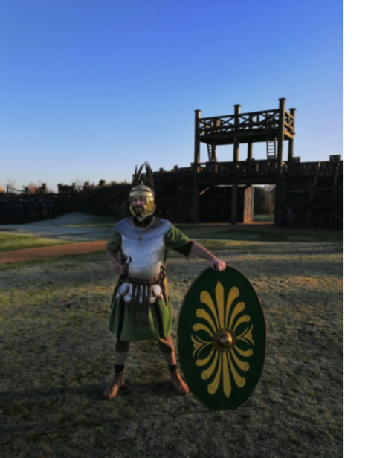 The terms Fort and Fortress refer to semi-permanent fortifications, forts being suitable for auxiliary forces of up to 1000, while fortresses could hold a legion of around 5500 troops. As a fort, Lunt was never large enough to hold an entire legion, but would have been home to parts of legions or auxillary forces. The longevity of these sites meant that they usually had some kind of associated settlement, commonly termed a vicus or canabae, the former referring to settlements outside forts and the latter outside a fortress. As the Lunt was short-lived, or at least only in use for short periods over the history of Roman occupation in Britain, it is doubtful that there was anything much resembling a permanent settlement or vicus in or near Coventry.

Early forts in Roman Britain, like the Lunt, were constructed at great speed to secure recently occupied areas. They were first built from turf and timber and were later rebuilt in stone when they needed to be renewed. The Lunt is unusual in that it was never rebuilt in stone because it was only in use for a short period of time (see Development and History of Lunt Fort). Also, it was unusual because of its irregular plan. The Lunt is basically regular except for one of the long sides of the fort which skirts irregularly round what is thought to be a gyrus or horse-training facility.

Thus this odd shape fits the Lunt’s unique use, and makes it a unique structure of the ancient Roman World. It seems hard to avoid the conclusion that this was a fort converted to fulfil a specialist function, seemingly, of horse training. Other features found include four granaries and six barrack blocks, over 100 rubbish pits and water storage tanks containing stratified artefacts, principally coins, pottery, glass, and military equipment. Also, within the sacellum (the small shrine inside the fort) an unusual pit-cellar was discovered, which had been built to store the garrison's pay chest.

Situation of the Fort

The fort sits on an ideal strategic site on a high plateau with a steep wooded slope overlooking the river Sowe to the north. The elevation from the top of the bank provides good views of the landscape to the north for two or three miles (4.0 km) in the direction of modern Coventry. To the south is a flat plateau while to the east and west the ground slopes appreciably, making the site an ideal location for a Roman fort. The Roman road now called the Fosse Way lies about 7 km to the south.

The site's defensive situation and its proximity to a crossing point in the river made it an ideal location. The river would have provided a source of fresh water and the Forest of Arden supplied timber for building. 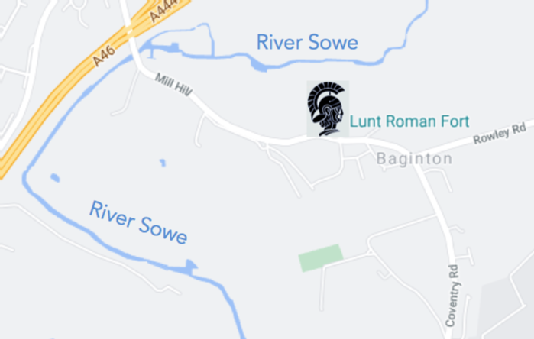 Seen in a wider aspect (above), the river Sowe effectively forms a boundary along three sides of the site, with the land lying open only towards the east. The elevation from the top of the bank provides good views of the landscape to the north for two or three miles.

The reason for the location of the camp will be discussed in the section on Development and History, but we have to assume that the location of the battle of Watling Street against Boudica in AD 61 must have lain nearby. Whether the fort was first begun before or after the battle is not known, but that the gyrus was constructed to train the horses taken at the battle has been put forward as a possibility, suggesting that the battle could not have been too far away from the site at Baginton.