The human family tree below, taken from the excellent Natural History Museum London website, shows our present understanding of human origins. 'Present understanding' is an important point because these ideas will no doubt develop and change with further analysis of the fossils and DNA, and with the finds that will be dug up in the coming years.

Human origins can be traced back to around three million years ago in Africa, with evidence for our related and sometimes ancestral hominins (human-like species) tracing back much further to about seven million years ago. Humans migrated out of Africa and into Europe and Asia a number of times in a series of events that are still being uncovered and understood (see below). But we know that the first human species to make it to Britain (then actually joined to mainland Europe as part of a continual land mass) was probably Homo heidelbergensis, examples of which include Boxgrove man (see section on the Palaeolithic). 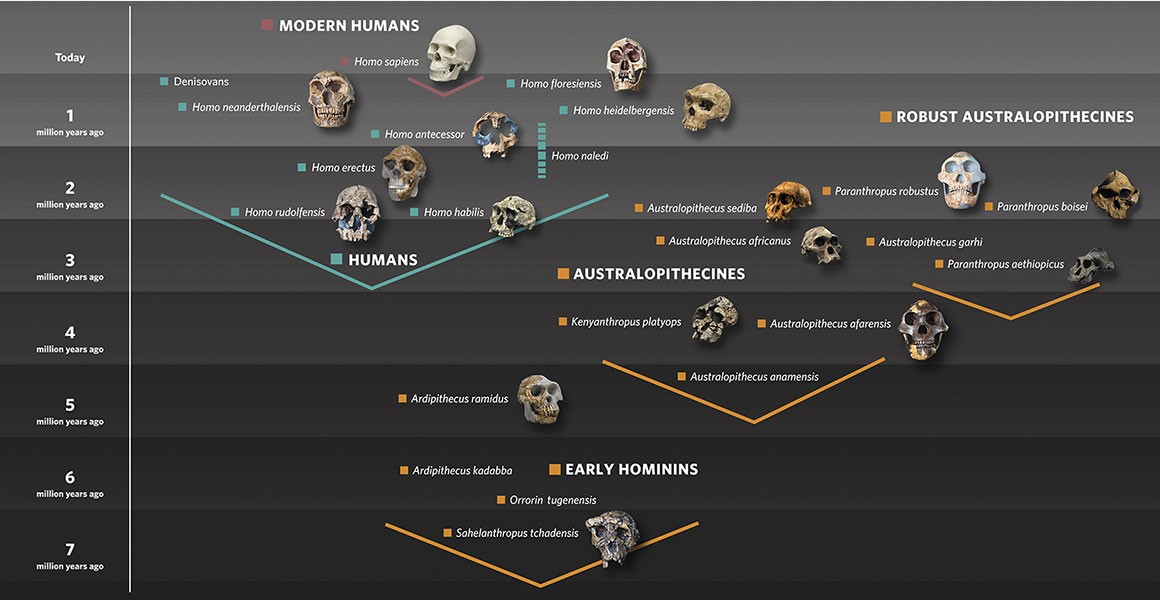 The exact number of separate species and how they are related to each other is a matter of ongoing debate. So if the above diagram seems confusing, that it because we are uncertain of many of these relations. In studying the distant past, uncertainty is pretty much a normal part of the process, but it means that we are at the exciting stage of so much still to be discovered and pieced together.

A Quick Overview of our Origins

The first Britons were members of the species Homo heidelbergensis (above right) - or possibly the closely related Homo antecessor - descended from those first Homo erectus migrants out of Africa. You can read more about these first Britons in the section on Palaeolithic Britain.

The next wave of people to enter Britain were members of the species Homo sapiens - modern humans. It is thought that modern humans descended from Homo heidelbergensis (or possibly Homo rhodesiensis) in Africa about 200,000 years ago. These modern humans subsequently migrated out of Africa (probably a number of separate times) entering Europe and eventually populating the entire globe.

The Changing Picture of Humans in Britain

Another excellent website specifically covering the human occupation is Prof Chris Stringer's AHOB (Ancient Human Occupation of Britain) website from which we have taken the following chart. Again, on first glance it may look confusing, but it is a nice summary of the evidence for humans in Britain through time, and the changes in climate that these humans will have experienced. The top of the diagram is the most recent, so the further down you look, the earlier in time we find ourselves. 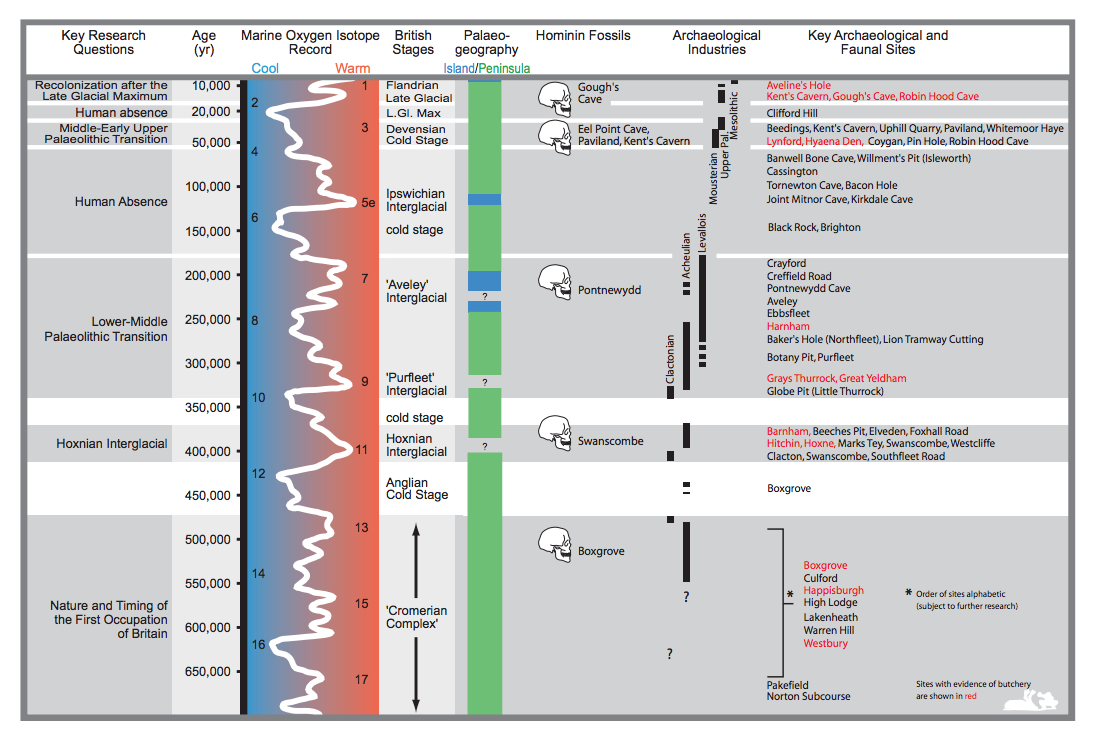 One important things to take away from the chart is the changes in global temperatures which led to the various ice ages, along with the related absence of evidence for humans in Britain between about 180,000 and 60,000 years ago, and again during the Late Glacial Maximum (the last great ice age) around 20,000 years ago. In short, for long periods Britain was in the grip of the ice ages and often covered in a thick sheet of ice, making human habitation impossible.

The green line down the centre reveals when Britain was a peninsula - i.e. an outcrop of mainland Europe to which it was physically joined. The smaller periods of blue (in the warmer periods when the ice caps had melted and sea water levels rose), are the times when Britain, like now, was an island. As will be seen, for most of its history, Britain was a part of the European mainland. You can read more about the formation of Britain as an island in the other sections.