Iron Age Britons lived in organised tribal groups, ruled by a chieftain. These groups would have changed and evolved throughout the Iron Age, and their early interactions seem to have been hostile, perhaps as tribal groups and boundaries settled in to place. This inter-tribal warfare was traditionally interpreted as the reason for the building of hill forts, as defensive areas where small communities across the landscape could muster and stand their ground when attacked.

Although the first hillforts had been built about 1500 BC, building peaked during the later Iron Age. There are over 2,000 Iron Age hillforts known in Britain. By about 350 BC many hillforts went out of use and the remaining ones were reinforced. Why so many went out of use is not known. Perhaps people had begun to meet together as larger tribal groups in just a few of the most important hillforts.

We will look at these larger tribal groups - those which had developed by the time of the arrival of the Romans in AD43 - below, focusing especially on the tribes who may have lived in the area occupied by present day Warwickshire.

The names of the Celtic Iron Age tribes in Britain were recorded by Roman and Greek historians and geographers, especially Ptolemy. Claudius Ptolemy (who lived ca. AD100 – ca.170 AD) was a mathematician, astronomer, and geographer from Alexandria in Egypt. His geographical works are one of the main sources for the names and distribution of the British tribes. Information from the distribution of Celtic coins also allows us to map this distribution, but the exact ranges of the tribal territories will always remain speculative.

We should also note that the names that Ptolemy and others gave the British Tribes were not necessarily the names by which the tribes knew themselves. The name "Durotriges" for example may mean "hillfort-dwellers", referring to the fact that hillforts continued to be occupied in this area after they were abandoned elsewhere in the south of Britain. It is unlikely that the Durotriges named themselves after their hillforts. In the same way, the tribal name "Regnenses" is actually Latin and means "inhabitants of the (client) kingdom". You can read more about client kingdoms here.

Given our inexact knowledge of the distribution of the tribes in Iron Age and subsequently Roman Britain, it is actually quite difficult to give a definite answer to the question of which tribes inhabited the area which later became Warwickshire. As the map below shows, apart from the Dobunni in the SW, Warwickshire seems to be centrally placed in a sort of no-mans land between the territories of the Corieltauvi and the Catuvellauni.

Archaeology helps us somewhat here, for the distribution of Iron Age coins falls broadly into two, with concentrations of Corieltauvian coinage in the north of the county, and Dobunnic coinage in the south. The distributions overlap at sites such as Alcester and Tiddington. As will be discussed below, the tribal capitals of the Dobunni and Corieltauvi also lay closer to us than that of the Catuvellauni, but that does not rule out the possibility that each of these tribes may have had an influence here and that the people of different parts of the region may have thought themselves affiliated to each of these tribes. It is also possible that certain inhabitants of the region imagined themselves affiliated to none of these groups as well. At best, we ought to imagine that the people of Roman Warwickshire at the very least had connections with and shared elements of identity and culture with each of these tribes, and especially perhaps the Corieltauvi.

We shall look at each of these tribes in a bit more detail below. But it also worth noting that in the first century AD, the tribes of our region were very much on the periphery of the Romano-British world, whose core lay in the south east. In many ways the people of this region acted as middlemen. As the archaeologist Barry Cunliffe explains, "Beyond the core was a peripheral zone of tribes who traded with the core and through whose territory raw materials and slaves from the north and west of the country passed." (Cunliffe, Britain Begins (2012) page 367). 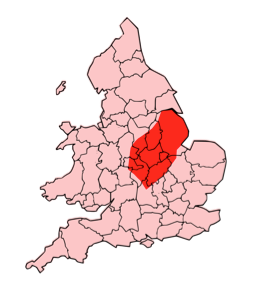 The Corieltauvi (sometimes referred to as the Corieltavi) were a tribe of people living in Britain prior to the Roman conquest, and after the invasion became a client Kingdom, or civitas in Latin, of Roman Britain. Civitates (plural form of civitas) were independent administrative centres, governed by the Britons themselves, though under the supervision of Roman provincial administration based in Londinium (London). You can learn more about the client Kingdoms here.

The territory of the Corieltauvi was in what is now the English East Midlands. They were bordered by the Brigantes to the north, the Cornovii to the west, the Dobunni and Catuvellauni to the south, and the Iceni to the east. Their capital was called Ratae Corieltauvorum, modern day Leicester.

As with most Iron Age tribes, the Corieltauvi were largely an agricultural people. They had only a few strongly defended sites or signs of centralised government, and appear to have been a federation of smaller, self-governing tribal groups.

From the beginning of the 1st century BC, they began to produce inscribed coins: almost all featured two names, and one series had three, suggesting they had multiple rulers. The names on the earliest coins are so abbreviated as to be unidentifiable. Right is a gold stater dating to 50-20BC on display at Lincolnshire Museum and produced by the Corieltauvi. Later coins feature the name of Volisios, perhaps the most important king of the region, together with names of three presumed sub-kings, Dumnocoveros, Dumnovellaunus and Cartivelios, in three series minted ca. 45 AD. The Corieltauvi had an important mint, and possibly a tribal centre, at Sleaford.

They seem to have offered little or no resistance to Roman rule. Ratae was captured ca. AD 44, and it may have had a Roman garrison. The Fosse Way, a Roman road which runs through much of south Warwickshire, passed through their territory.

The Dobunni were one of the Iron Age tribes living in the British Isles prior to the Roman invasion of Britain and are known from several references to the tribe in Roman histories and from inscriptions.

The meaning of the name is unclear but some archaeologists such as Miles Russell suggests that their original name may have been "Bodunni", connected with the Celtic word *bouda meaning "Victorious", in the sense of "The Victorious Ones". The name Boudica is also linked to this word meaning victory.

The tribe lived in the area of southwestern Britain coinciding with the modern counties of Bristol, Gloucestershire and the north of Somerset, although at times their territory may have extended into parts of what are now Herefordshire, Oxfordshire, Wiltshire, Worcestershire, and Warwickshire. Their capital was known by the Romans as Corinium Dobunnorum, modern day Cirencester. As for the surrounding peoples, it is thought that they were bordered by the Cornovii and Corieltauvi to the North; the Catuvellauni to the East; the Atrebates and Belgae to the South; and the Silures and Ordovices to the West. But exact ranges for each of these tribes are unknown.

In the Iron Age period, the Dobunni were a large group of farmers and craftsmen, living in small villages concentrated in fertile valleys. Remnants of several fortified Dobunni hillforts can be seen in the Bristol area. In the late Iron Age period, southern Britain saw the development of sites generally referred to as oppida (towns),with an example being Salmonsbury, and Bagendon near Cirencester.

Right is a silver Dobunni coin now housed at Salisbury and South Wiltshire Museum, dating from between 50BC and AD43. In the Roman period, like the Corieltauvi the Dobunni became a client Kingdom of the Romans, maintaining good relations with their Roman overseers.

A study of the religion of the Dobunni by Stephen Yeates has shown that there was a focus on the worship of the natural world. It is possible to identify deities associated with the landscape; for example: *Cuda, a mother goddess associated with the Cotswold Hills, and its rivers and springs.

The Catuvellauni (possibly meaning "war-chiefs" in the ancient Gaulish Celtic language) were a tribe or state of south eastern Britain before the Roman conquest, attested by inscriptions into the 4th century AD.

Something of the history and fortunes of the Catuvellauni and their rulers before the conquest can be traced through ancient coins and references in classical histories. They are mentioned, for example, by Cassius Dio, who implies that they led the resistance against the Roman conquest in AD 43. In the 2nd century AD they appear as one of the civitates (client Kingdoms) of Roman Britain in Ptolemy's Geography. In terms of where they were found, they were centred on the town of Verlamion (near modern St Albans) and the surrounding areas of Hertfordshire, Bedfordshire and southern Cambridgeshire. Thus their territory was bordered to the north by the Iceni and Corieltauvi, to the east by the Trinovantes, to the west by the Dobunni and Atrebates, and to the south by the Regnenses and Cantiaci. As such the inhabitants of Warwickshire will at the very least have interacted with these people.

The story of the rulers of the Catuvellauni and their interactions with Rome is an interesting one, and we shall focus more on this in the section on Interactions.

Left is a coin of the Catuvellauni King Tasciovanus, a so-called "Hidden Faces" gold stater minted at Verlamion near modern day St Albans. On the obverse we see stylized crescents and wreaths with hidden faces. On the reverse is a warrior on horse, carrying a carnyx - a sort of bronze wind instrument with a typical S-shape and often with a stylised animal head.