Being Human festival 2021: The Ancestors: exploring Black History through theatre

The panel discussion reflected on Freedom & Revolution, a joint project by the University of Warwick, English Heritage and National Youth Theatre exploring the hidden Black history of Portchester Castle near Portsmouth through a new play that re-thinks race and gender in the French Revolution. The play, The Ancestors, written by Lakesha Arie-Angelo and directed by Jade Lewis, was rehearsed, staged and filmed at the Castle in August 2021 with a cast of young performers aged 18-25 from National Youth Theatre’s network of creative young people. The Warwick contribution to the project was funded with support of the Arts and Humanities Research Council. The streamed discussion during the Being Human festival 2021 illuminated the power of theatre to communicate humanities research to new audiences. It explored how the partnership can be a model for creative collaboration and how combining research and co-creation can be empowering for young Black people. A film of the production premieres at Portchester Castle on 17th September 2022.

Freedom and Revolution Being Human festival 2020

In 1807 French prisoners of war from Napoleon’s navy were held on ships in Portsmouth bay. One group of prisoners wrote and performed a historical drama tackling how enslaved people of African descent fought for their freedom on Haiti in 1793. This play is the starting point for a bold new project called Freedom and Revolution which is a collaboration between researchers from the University of Warwick, English Heritage's Shout out Loud project and the National Youth Theatre. 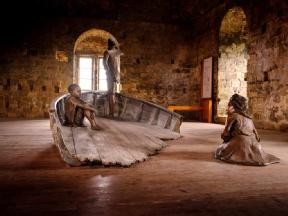 In November 2020, there was a one-off Being Human event online - a discussion between Warwick researchers Professor Kate Astbury and Abigail Coppins and National Youth Theatre playwright, director and sound artist. It offered insights into both the new research uncovered by and into the creative process of reconceptualising the prisoners of war's play with young participants from both the local community and the National Youth Theatre's creative process of taking archival material as the basis for a powerful new work of theatre about freedom, race and gender.

You can access a recording of the discussion here: https://youtu.be/vJIkc88fajYLink opens in a new window

AHRC follow-on funding gave us the opportunity to produce 2 melodramas in 2017, prisoner of war play Roseliska at Portchester Castle and Pixerécourt's Fortress on the Danube at the Georgian Theatre Royal in Richmond. See here for more details: Staging Napoleonic Theatre (warwick.ac.uk) and Roseliska (warwick.ac.uk)

Kate Astbury was PI on a major AHRC project to look at theatre during the period 1799-1815. Two PhD students and 2 postdocs worked on the project with her. Details of it can be found here: French Theatre of the Napoleonic Era - University of Warwick

Dr Katherine Astbury, in conjunction with the curators of Waddesdon Manor, successfully bid for an AHRC Collaborative doctoral programme award to develop collaboration between the University of Warwick the historic house Waddesdon Manor. The project enhanced our knowledge and understanding of the notion of spectacle in French Revolutionary prints and their role in the cultural production of the 1790s.