Congratulations to Fabio Camilletti and Mariano Tomatis on the publication of their new edition of Schiller's The Ghost-Seer! 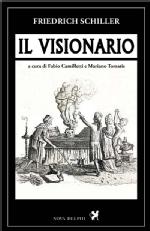 Published in 1789, when Europe and the world were about to change forever, Friedrich Schiller’s The Ghost-Seer is more than a novel. It is the first masterpiece of the German Gothic, triggering imitations and unauthorized sequels. It creates the genre of conspiracy novels, centred on the manoeuvres of invisible groups of power. It is a political book, analysing how the manipulation of a single man may destabilize an entire country. It is a philosophical treatise, arguing that power does not operate on rational intellect but rather on the imaginary. It is, finally, an illusionistic novel, crossed by charlatans and magicians, where the truth is never what it seems.
Following up on their project Mesmerized! , Fabio Camilletti and Mariano Tomatis recuperate these forgotten aspects of Schiller’s novel, through an innovative synergy between history of illusionism and history of culture. Their edition of The Ghost-Seer is complemented by an appendix, reconstructing and explaining all the magic tricks presented in the text through the indications of XVII-XVIII-century magic treatises.
Wed 06 Dec 2017, 13:45 | Tags: German - News Italian - News Modern Languages - Publications Modern Languages - Research news Modern Languages - News Italian - Publications Italian - Research news German - Research news SMLC News