Warwick Submarine is a group project for MEng final-year undergraduate students in the School of Engineering. Their task is to design and build a human-powered submarine and race it on an underwater course, competing with other top science and marine engineering students from across the world.

Breathing from on-board scuba equipment, the pilot lies prone in the submarine and propel the submarine by pedalling. Derived from a bicycle, the pedal power transfers through a bevel-gearbox powertrain, which is connected to the contra-rotating propellers. To steer the submarine, the pilot pulls levers which operate dive-planes to control pitch (up and down) and yaw (left and right).

For safety, an emergency buoy is released to the surface if the pilot lets go of the spring-loaded ‘dead man's switch'. A light attached to the hull helps the support team of US Navy divers locate the submarine in low light conditions.

Each year, a new group of students takes on the Warwick Submarine challenge.

The ISR is a biennial design and racing competition, involves various challenges:

In the racing, Godiva was able to achieve a speed of 2.88 knots – the best yet for the Warwick team and possibly a UK record. Godiva remains the UK champions in this competition.

The ‘Smooth Operator’ award recognises the team that was best organised in terms of race preparation, efficiency of operation (including on-the-startline pilot ‘lock-and-load’ drill), problem solving, effecting running repairs and overall reliability. It is a huge accolade for the Godiva team to have won this against very significant competition, notably from the Omer team (from the École de Technologie Supérieure, Montreal) and Delft’s WASUB team.

Dr Ian Tuersley from WMG, who has been the Project Director on the Warwick Submarine project for the past seven years said:

“Once again the Warwick Submarine ‘Godiva’ team have achieved an excellent result at the International Submarine Races. The ‘Smooth Operator’ award is testament to the hard work that the team have put in all year, not just to the engineering aspects of the project but also to such necessities as gathering the support of sponsors and the logistics of simply attending the competition with a viable racing submarine. In this project they have received support and advice from many people but the end result places us in a strong position for future development. I am immensely proud of all that they have achieved”. 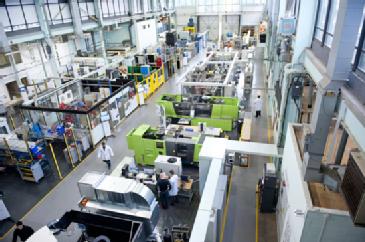 The base for building the submarine is the Engineering Hall in WMG's International Manufacturing Centre. There are dedicated workshop areas for students to work side by side with expert technicians, engineers and business partners.

Together with their academic home in the School of Engineering, immediately opposite WMG's International Manufacturing Centre, MEng students are at the heart of Warwick's central campus –
right where the University's reputation for manufacturing
excellence and innovation in engineering is forged.

Being able to draw on the technician support, facilities and various Research Groups whilst also gathering support and and advice from Industrial sponsors – is a fantastic opportunity for undergraduate students. They can put their academic learning to the test, tackle design challenges as a team and gain valuable experience working with commercial partners to build a submarine.

The Warwick Submarine project is supervised by Dr Tuersley, Director of Studies at the School of Engineering and an Associate Professor at WMG.

Students can also draw on research from across the University, particularly in Innovative Manufacturing, which is one of Warwick's 11 Global Research Priorities (GRPs). These programmes bring researchers together to address some of the most challenging problems facing the world today.

Dr Peter Wilson, a post-doctoral research fellow in the Sustainable Materials and Manufacturing Group at WMG and Innovative Manufacturing GRP member, specialises in fibre-reinforced polymer composites. His research into recycled carbon fibre was applied in the materials used to make Godiva 3's hull. This was a major leap forward in Warwick Submarine's development. As well as winning the award for ‘Best Use of Composites’ at the 2017 International Submarine Races, Godiva 3 is the largest example of this kind of technology used anywhere in the world to date.

Another member of the Innovative Manufacturing GRP and Associate Professor at WMG, Dr Stuart Coles, also contributes his expertise on Sustainable Materials and Manufacturing to the student project.

An attractive and important aspect of the group project is the opportunity for students to work with commercial partners to turn design ideas into a fully-functional, robust and race-ready submarine. Sponsors for 2019 include Babcock, Stratasys and 3M.

The team all learn how to use scuba diving equipment, so they can test, pilot and support the submarine under water. Nigel Denton, Senior Teaching Fellow at WMG, is a nationally-qualified diving instructor with the British Sub Aqua Club. He trains the students to dive with generous help from sponsor Stoney Cove, the UK's National Diving Centre in Leicester.The relationship between 3M and Warwick Submarine dates from the early days of the project and in 2016 3M's co-directors invited the Warwick students to visit their Bracknall Customer Innovation Centre to see how 3M could further develop their support for the student project.

Students in the 2018/19 team have been able to learn from the work by previous teams. Continuous improvement, testing and refinement is vital to a successful race.

The Warwick Submarine project started in 2013, directed by Dr Tuersley. After an initial concept-only design project, the second group of students designed and built Shakespeare to race at the European International Submarine Races (eISR) in 2014. Rock-solid and hefty, it passed all pre-race scrutiny tests, and featured a contra-rotating propeller to reduce rotational torque. Shakespeare still holds the slowest track speed record at QinetiQ's Ocean Basin in Gosport – but it completed the course!

While subsequent teams were unable to complete the race course in 2015 and 2016, they still made substantial leaps forward in innovation and their use of novel materials.

At the ISR-13 races in Maryland, USA in June 2015, Godiva won the Innovation award (including a $1,000 prize) in recognition of its biodegradable hull design, rotor asymmetric chain ring, fold away hull design and extensive use of 3D printing. The fold away, or ‘flat pack’ system, minimised the cost of shipping Godiva from Warwick to the USA to approximately one third of competing European universities' costs. The team also won an honourable mention for their design report submission.

Back at Gosport in July 2016, the team won the Best Design Report award with Godiva 2. They also used the same biodegradable hull material of Godiva, but with glass microspheres to aid buoyancy. A standout feature was that the submarine was the most 3D-printed vessel at the races.

The 2017 entry to ISR-14 also performed spectacularly, winning awards for Best Design Outline and Best Use of Composites. The team also achieved 3rd place in their category for speed, reaching an impressive 2.52 knots. This represented the best racing result and final awards of all UK teams, beating out competition from the University of Bath and the University of Southampton.

So, what's next for Warwick Submarine?

One idea the team trialled with Godiva 3 in 2017 is a ‘fly-by-wire’ system. This enables the pilot to direct the submarine using a joystick instead of handlebars. The team ultimately chose not to use fly-by-wire, as the controls weren't yet reliable enough for the demands of racing. However, the groundwork is ready for the 2019 team to incorporate this technology, should they wish to.

The 2018/19 team hand over the reins to a new group of final-year students in September 2019. All involved are excited to see Warwick Submarine’s winning streak in the 2020 competition!

“Getting involved with ISR has helped translate theoretical knowledge of engineering to more practical and hands on skills. This sort of experience is exactly what I need to help pursue a career as a professional engineer.”