The Applied Maths Seminars are held on Fridays 12:00-13.00 on MS Teams. You can send a membership request via MS Teams or email susana dot gomes at warwick dot ac dot uk if you want to be added to the team. Once you have joined the team, you will receive an Outlook invitation to the seminar itself every week, and all you will have to do is join the meeting at the right time, either via the browser or app interface.

Please contact Susana Gomes if you have any speaker suggestions.

Week 1. Anastasia Borovykh (Imperial) - To interact or not? On the convergence properties of interacting particle optimization

A good machine learning model can be characterized by i) convergence (close) to the optimum, ii) good generalization performance. The conventional way of optimizing is to run one instance of an optimizer. The question we address here is whether it is beneficial to run multiple instances, or particles, and allow these to interact. Working in the general context of stochastic mirror descent, we present convergence results which show that by controlling the interaction the variance of stochastic gradients can be reduced. At the same time interactions can help in converging to flatter minima which have been shown to generalize better.

Collective behaviours provide some of the most dramatic spectacles in nature, and some of the most dangerous in human societies. From swooping bird flocks and swirling balls of fish, to stock market crashes and crowd disasters, these phenomena are driven by interactions between individuals; following others, learning from their choices, and trying to survive and prosper in a social context. Mathematical models are crucial for understanding how individual interactions scale up to form group behaviours, but what are these interactions and where do they come from? In recent years much work has been done to uncover the precise rules governing how individual interactions empirically. Another approach, which I will describe here, is to develop “normative” models of behaviour, identifying the behaviours that theoretically optimise utility or fitness. Using a normative model of collective decision making I will show how key features of experimental data are consistent with animals maximising their expected utility based on social and private information. I will explore how ecological differences explain variation between animal species, and why animals may exhibit different social behaviour in the laboratory and the wild. I will also show why a normative, theory-driven approach is an essential companion to data-driven discovery of behavioural rules, and I will argue that “model-free” inference is a myth.

Over the last years, numerical methods for the analysis of large data sets have gained a lot of attention. Recently, different purely data-driven methods have been proposed which enable the user to extract relevant information about the global behavior of the underlying dynamical system, to identify low-order dynamics, and to compute finite-dimensional approximations of transfer operators associated with the system. However, due to the curse of dimensionality, analyzing high-dimensional systems is often infeasible using conventional methods since the amount of memory required to compute and store the results grows exponentially with the size of the system. We extend transfer operator theory to reproducing kernel Hilbert spaces and show that these operators are related to Hilbert space representations of conditional distributions, known as conditional mean embeddings in the machine learning community. One main benefit of the presented kernel-based approaches is that these methods can be applied to any domain where a similarity measure given by a kernel is available. We illustrate the results with the aid of guiding examples and highlight potential applications in molecular dynamics, fluid dynamics, and quantum mechanics.

Elastic and acoustic waves are in many ways ideal to probe materials: they travel with ease in most solids, easy to generate, and are safe for humans and for the material (in contrast to say X-rays or drilling holes). The figure below illustrates how to measure the stress σ1 in a solid plate by using elastic shear waves. We can estimate the stress from the time it takes for the shear wave to travel across the plate, because the higher the stress, the faster the shear wave will travel. 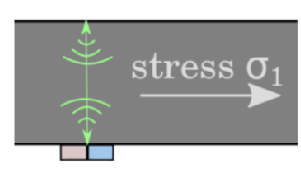 Despite these advantages, there is a significant drawback: to interpret the measurements, you often need to already know many elastic constants. For example, the higher the Young’s modulus the faster the waves travel, irrespective of the stress.

In this talk, I will show how we can use universal relationships between stress and strain to design measurements which do not need this prior knowledge of the materials elastic constants. Although I will focus on measuring stress, some of these tricks translate to designing other measurements for anisotropic materials.

Week 1. Mikhail Poluetkov (WMG) - Non-parametric models in a form of function trees and methods of their identification using experimental data

This talk introduces a conceptually novel approach to data modelling. The data is considered to be a set of approximately known records of a physically deterministic system, where the output is assumed to be a result of the multiple inputs. The model is sought as a composition of multiple functions of one variable (a function tree), which is an equivalent replacement of a continuous multivariate function and is known as the Kolmogorov-Arnold representation. Furthermore, the model is non-parametric, which implies that the shapes of the involved functions are directly determined in the process of identification.

A hydrogel is a soft, two-phase system consisting of a deformable solid matrix that is swollen with fluid. Slightly altering the temperature or pH of the surrounding environment can trigger the spontaneous formation of structures within and on the surface of the gel. This process, called phase separation, is of fundamental importance to materials science and cell biology due to its relevance in smart materials and neurodegenerative diseases. In this talk, I will discuss a flexible framework for deriving phase-field models of hydrogels using non-equilibrium thermodynamics. Numerical simulations and phase-plane analyses will be used to explore the wealth of scenarios that occur when a hydrogel undergoes phase separation. These include the propagation of fronts that destabilise and then rupture, and the formation of highly localised, highly swollen phases that are ejected from the free boundary of the gel one by one. Asymptotic methods will then be used to examine the electric double layer that forms at the interface between a polyelectrolyte gel and solvent bath. Phase transitions can lead to double layers with finite thickness or periodic structures while producing large compressive stresses that may result in instability. The talk will conclude with a discussion of viscoelastic and granular materials and current challenges in this area.

Week 3. Josephine Evans (Warwick) - Existence of a non-equilibrium steady state for the non-linear BGK model on an interval.

The BGK (Bhatnagar, Gross and Crook) equation models the behaviour of a dilute gas. It is similar to but simpler than the Boltzmann equation. We study the BGK equation where the space variable is in an interval with boundary walls which are heated to different temperatures. We show the existence of a non-equilibrium steady state for this equation when the boundary temperatures are large. I will discuss our results and also the interest of non-equilibrium steady states for non-linear gas equations and the challenges related to their analysis.

Data-driven disease modeling and prediction are currently under intense pressure to deliver answers on a wide array of questions. In this talk I will therefore present work on Bayesian modeling of disease spread at national scales.

I first consider an endemic situation, namely the spread of shiga toxin-producing E. coli in Swedish cattle, and for which we have data over extended periods of time: this includes sample disease measurements (prevalence estimates), as well as a detailed transport network over about 10 years. The measurements are low-informative on the epidemiological state and distributed sparsely in both space and time. Nevertheless, we develop a Bayesian simulation-driven approach which performs convincingly, thus producing an in silico replica of the disease with predictive value. Some of the efforts that went into judging the identifiability and robustness of the overall procedure will be detailed, as well as tentative applications towards disease control.

I will conclude by highlighting an ongoing modeling effort concerning the Covid-19 situation in Sweden. The aim is to make use of several different data sources and produce predictions for the demands on hospitals, for early detection of hot-spots, and provide insight on the effectiveness of mitigation measures.

We propose fully-discrete, implicit-in-time finite-volume schemes for general non-linear non-local Fokker-Planck equations with a gradient flow structure. The schemes verify the positivity-preserving and energy-dissipating properties, done conditionally by the second order scheme and unconditionally by the first order counterpart. Dimensional splitting allows for the construction of these schemes with the same properties and a reduced computational cost in any dimension. We will showcase the handling of complicated phenomena: free boundaries, meta-stability, merging, and phase transitions.

In this talk, we will consider a class of nonlocal viscous Cahn-Hilliard equations with Neumann boundary conditions for the chemical potential. The double-well potential will be allowed to be singular (e.g. of logarithmic type), while the singularity of the convolution kernel will not fall in any available existence theory under Neumann boundary conditions. We will prove well-posedness for the nonlocal equation in a suitable variational sense. Secondly, we will show that the solutions to the nonlocal equation converge to the corresponding solutions to the local equation, as the convolution kernels approximate a Dirac delta. The asymptotic behavior will be analyzed by means of monotone analysis and Gamma-convergence results, both when the limiting local Cahn-Hilliard equation is of viscous type and of pure type. This is based on a series of joint works with H. Ranetbauer, L. Scarpa, and L. Trussardi.

Data assimilation is broadly used in atmosphere and ocean science to correct error in the state estimation by incorporating information from measurements (e.g. satellites) into the mathematical model. The widely-used variational data assimilation method has a drawback of a drastic increase of the number of local minima of the corresponding cost function as the number of measurements increases. The shadowing approach to data assimilation, which was pioneered by K. Judd and L. Smith in Physica D (2001), aims at estimating the whole trajectory at once. It has no drawback of several local minima. However, it is computationally expensive, requires measurements of the whole trajectory, and has an infinite subspace of solutions.

The Hellinger--Kantorovich metric is an unbalanced generalization of the Wasserstein distance, allowing the comparison of non-negative measures of arbitrary mass. The Wasserstein barycenter is a geometrically
intuitive way to form an average between probability measures. In this talk we study the barycenter of the Hellinger--Kantorovich metric. We find that it differs substantially from the Wasserstein barycenter by exhibiting a local clustering behaviour that depends on the length scale of the input measures.
Joint work with Gero Friesecke and Daniel Matthes.
Preprint: https://arxiv.org/abs/1910.14572

How do cosmologists model the early Universe? In this non-specialist talk, I will give an introduction to the leading theory of the early Universe known as cosmological inflation, which postulates a brief period of exponential cosmic expansion 13.8 billion years ago. I will explain why inflation is needed, and give some insights into its mathematical details. I will describe some unsolved problems in inflation, and describe how future experiments (such as space-based gravitational-wave satellites) could constrain and rule out competing inflation models, hence giving new insights into the origin of the Universe.

Internet Access at Warwick:
Where possible, visitors should obtain an EDUROAM account from their own university to enable internet access whilst at Warwick.
If you need WiFi whilst at Warwick, click here for instructions (upon arrival at Warwick)
Registration:
You can register for any of the symposia or workshops online. To see which registrations are currently open and to submit a registration, please click here.
Contact:
Mathematics Research Centre
Zeeman Building
University of Warwick
Coventry CV4 7AL - UK
E-mail:
mrc@maths.warwick.ac.uk