£3.5 million donation for aspiring astronomers to reach for the stars

Find out more about the donation.

Professor Sandra Chapman (CFSA) awarded the 2020 Ed Lorenz Lecture for the Fall Meeting of the American Geophysical Union (AGU) – which will be one of the world’s largest virtual scientific conferences [1-17 December 2020]. The Ed Lorenz Lecture is given on topics in non-linear physics across all for space and geophysics. Lecture will explore how advances in fundamental physics can help quantify space weather risk.

Professor Pam Thomas, PVC (Research) and leader of the Ferroelectrics and Crystallography group in the Department of Physics, has been announced as CEO of the Faraday Institution (FI), the research arm of the UK’s £289m national battery challenge, following on from her 30 years as a member of academic staff at Warwick.

A founding member of the Board of Trustees at the FI since 2018, Pam is passionate about addressing the challenges faced by the wider energy storage ecosystem and the UK’s quest towards Net Zero.

X-ray analysis of artefacts from Henry VIII’s warship, the Mary Rose, sheds new light on their construction and conservation

X-ray analysis of artefacts from Henry VIII’s warship, the Mary Rose, sheds new light on their construction and conservation. The team included Emeritus Prof Mark Dowsett, his partners in Ghent and used XRD facilities in the Warwick RTP as well as the XMaS beamline. The paper is published in the Journal of Synchrotron Radiation, DOI: /10.1107/S1600577520001812 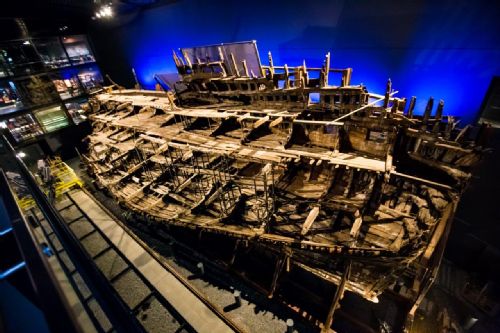 Muon Ionisation Cooling Paves the Way to the Muon Collider

For the first time scientists have observed muon ionization cooling – a major step in being able to create the world’s most first muon collider. The international Muon Ionization Cooling Experiment (MICE) collaboration, in which a team led by Dr Steve Boyd at the University of Warwick is a core member, has made a major step forward in the quest to create a muon collider.

To make the cloud less diffuse, a process called beam cooling is used. This involves getting the muons closer together and moving in the same direction. Until now, the question has been whether you can channel enough muons into a small enough volume to be able to study physics in new, unexplored systems. This new research, published in Nature, shows that it is possible. The results of the experiment, carried out using the MICE muon beam-line at the Science and Technology Facilities Council (STFC) ISIS Neutron and Muon Beam facility on the Harwell Campus in the UK, clearly show that ionization cooling works and can be used to cool muon beams, leaving open the possibility for the construction of new high energy muon colliders and neutrino factories in the future.

The clearest and most detailed images of the Sun have been captured by the largest telescope in the world. Just-released first images and videos from the National Science Foundation’s (NSF) Daniel K. Inouye Solar Telescope reveal unprecedented detail of the Sun’s surface, with experts saying it will enable a new era of solar science and a leap forward in understanding the Sun and its impacts on our planet.

Members of the Centre for Fusion, Space and Astrophysics at the University of Warwick are part of a UK consortium, led by Queen’s University Belfast, that developed and supplied the cameras used to takes the images. Funding has been provided by UK Research and Innovation’s Science and Technology Facilities Council.

The Inouye Solar Telescope provides a view of the Sun’s atmosphere that is ground-breaking. The dynamics of the solar surface are revealed at an unparalleled level of quality and detail. The telescope will provide the ladder for a step change in our understanding of how the Sun’s activity manifests itself through flares and eruptions, as well as the flow of energy and matter into the Sun’s corona. The telescope will also play a critical role in understanding space weather.