Researchers in WMG and the Department of Physics at the University of Warwick have found that asymmetric stresses within electrodes used in certain wearable electronic devices provides an important clue as to how to improve the durability and lifespan of these batteries.

Batteries for medical applications and wearable devices continue to evolve in size and shape, with miniaturisation of Li-ion technologies becoming increasingly popular. However, as the size of the battery shrinks, the fabrication process for composite electrodes and the use of liquid electrolyte is becoming a processing challenge for microfabrication using conventional approaches. 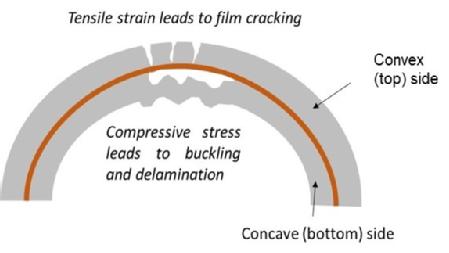 Lithium cobalt oxide LiCoO2 (LCO) has remained a common choice of cathode for these small formats due to its high voltage platform and energy density. However, following the initial reported performance benefits of LCO, it is known that LCO cells have large impedance issues due to the growth of high surface layer resistance and charge transfer resistance. This can affect how efficiently the battery charges and discharges. There are also ethical and health considerations around the use of the element cobalt. The increasing impedance was thought to be attributable to the growth of a surface layer on both the anode (solid electrolyte interface, SEI) and cathode (cathode electrolyte interface, CEI) due to the reaction between the electrodes and the electrolyte.

However, in the paper “Ageing analysis and asymmetric stress considerations for small format cylindrical cells for wearable electronic devices” published recently in the Journal of Power Sources, the University of Warwick’s WMG and Physics department researchers disassembled these cells. They have found that and the condition of the cathode and anode varied greatly after 500 cycles, as a function of which side of the current collector it was on. 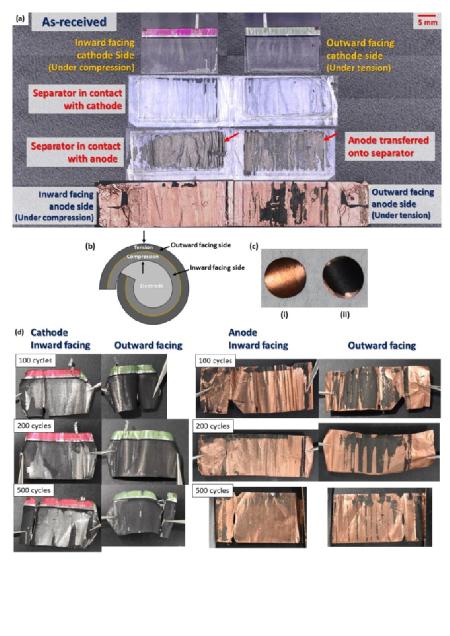 “It is interesting to note that, for both the cathode and the anode, the delamination is more severe on the electrode coating side that would have been subjected to compression stress, rather than tensile strain. This can be further explained by considering the asymmetric forces in place on either side of double side coated electrodes.”

The research team also carried out electrochemical testing, X-ray photoelectron spectroscopy (XPS), X-ray computed tomography (XCT) and scanning electron microscopy SEM), to reveal the battery’s structural features and changes. They found that it maintains 82% cell capacity after 500 continuous charging and discharging, after which it shows severe delamination due to high bending stress exerted on the cell components. However this seemingly has minimum impact on the electrochemical performance if the coating is sufficiently compressed in the jelly roll with a good electrical contact. After ageing, the surface layers continue to grow, with more LiF found on the cathode and anode.

Their research opens up exciting areas in battery manufacturing to address winding issues for cylindrical cells (especially miniaturised formats). For example, highlighting the need to understand whether there is merit in varying the coating properties on each side of double-sided coating for wound cylindrical cells, in order to improve the mechanical resilience of coatings that have asymmetric stresses exerted on them.

https://warwick.ac.uk/services/communications/medialibrary/images/july_2020/wearable_image.jpg
Caption: An image demonstrating the stresses to anodes and cathodes after cycles.
Credit: WMG, University of Warwick

https://warwick.ac.uk/services/communications/medialibrary/images/july_2020/mel_l.jpg
Caption: A diagram of how tensile strain leads to the film cracking
Credit: WMG, University of Warwick

The full research team on the paper were: