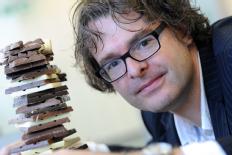 It may not make chocolate one of your five a day - but scientists have found a way to replace up to 50 per cent of its fat content with fruit juice.

University of Warwick chemists have taken out much of the cocoa butter and milk fats that go into chocolate bars, substituting them with tiny droplets of juice measuring under 30 microns in diameter.

They infused orange and cranberry juice into milk, dark and white chocolate using what is known as a Pickering emulsion.

Crucially, the clever chemistry does not take away the chocolatey ‘mouth-feel’ given by the fatty ingredients.

This is because the new technique maintains the prized Polymorph V content, the substance in the crystal structure of the fat which gives chocolate its glossy appearance, firm and snappy texture but which also allows it to melt smoothly in the mouth.

The final product will taste fruity - but there is the option to use water and a small amount of ascorbic acid (vitamin C) instead of juice to maintain a chocolatey taste.

Dr Stefan Bon from the Department of Chemistry at the University of Warwick was lead author on the study published in the Journal of Materials Chemistry. 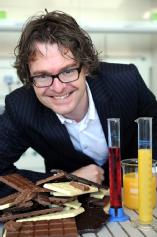 He said the research looked at the chemistry behind reducing fat in chocolate, but now it was up to the food industry to use this new technique to develop tasty ways to use it in chocolate.

Dr Bon said: “Everyone loves chocolate – but unfortunately we all know that many chocolate bars are high in fat.

“However it’s the fat that gives chocolate all the indulgent sensations that people crave – the silky smooth texture and the way it melts in the mouth but still has a ‘snap’ to it when you break it with your hand.

“We’ve found a way to maintain all of those things that make chocolate ‘chocolatey’ but with fruit juice instead of fat.

“Our study is just the starting point to healthier chocolate – we’ve established the chemistry behind this new technique but now we’re hoping the food industry will take our method to make tasty, lower-fat chocolate bars.”

The scientists used food-approved ingredients to create a Pickering emulsion, which prevents the small droplets from merging with each other.

Moreover, their chocolate formulations in the molten state showed a yield stress which meant that they could prevent the droplets from sinking to the bottom.

The new process also prevents the unsightly ‘sugar bloom’ which can appear on chocolate which has been stored for too long.

The study, entitled Quiescent Water-in-Oil Pickering Emulsions as a Route toward Healthier Fruit Juice Infused Chocolate Confectionary was co-authored by Thomas Skelhon, Adam Morgan, and Nadia Grossiord at the University of Warwick.

The published study is available here

Further information about the University of Warwick's Department of Chemistry

Crucial pieces of equipment used in this research were funded through the Science City Research Alliance (SCRA) Advanced Materials project. SCRA is a strategic research partnership between the University of Warwick and the University of Birmingham with a specific remit to work with businesses across the region. It has benefited from a multi-million pound investment in equipment and research infrastructure across both institutions via Birmingham Science City and the European Regional Development Fund.

For a draft copy of this study or for further information:

The published study is available here

Further information about the University of Warwick's Department of Chemistry