· The team used phage (bacterial viruses) to search billions of potential peptides, and to identify the most active, which had just 14 amino acids.

Controlling, and mitigating the effects of ice growth is crucial to protect infrastructure, help preserve frozen cells and to enhance texture of frozen foods. An international collaboration of Warwick Scientists working with researchers from Switzerland have used a phage display platform to discover new, small, peptides which function like larger antifreeze proteins. This presents a route to new, easier to synthesise, cryoprotectants. 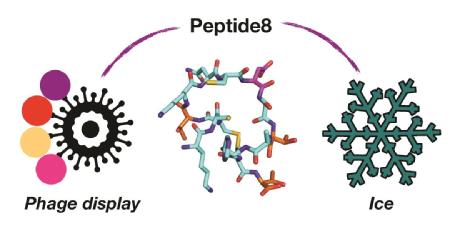 Ice binding proteins, which includes antifreeze proteins, are produced by a large range of species from fish, to insects to plants, to prevent the damage caused by ice. The proteins achieve the remarkable function of recognizing and binding to ice, even in the huge excess of water (which ice is the solid form of). New antifreeze proteins have typically been discovered by isolation from the organisms.

In this work, the team took a very different approach by screening billions of possible peptides to find those which could bind to ice. This was achieved by Phage Display – a technology whereby a virus is used to generate vast numbers of peptides, and those which ‘bind’ to the ice can be isolated.

Using this a cyclic peptide of just 14 amino acids (which is very short compared to a typical protein) was discovered which could bind to ice. The team used computer simulations to understand how the peptide binds to the ice, which is not possible by ‘wet’ experimental techniques alone. The team also showed how this short peptide can be used to help purified other proteins by ace affinity purification.

By identifying these short peptides, it means researchers can now simply make (or buy) modified peptides to understand and probe how these interact with ice and help design new cryoprotectants with simplified structures, and hence lower cost.

In the paper “A Minimalistic Cyclic Ice-Binding Peptide from Phage Display”, published in Nature Communications the international team including the University of Warwick and led by EPFL, Switzerland, have demonstrated the use of phage display to discover new minimalistic antifreeze peptides, which could not be achieved by conventional tools, which would not allow the billions of potential structures to be screened.

Dr Gabriele Sosso, Assistant Professor at the University of Warwick, in the Department of Chemistry comments:

“This work highlights that even very small changes within the structure of these peptides can make a huge difference in their ability to control the formation of ice. Our computer simulations allowed us to identify and understand the importance of these structural changes – which is a key step toward the rational design of synthetic cryoprotectants.

“It is such a privilege to be able to leverage both the experimental work of the Gibson’s group and the computational resources of the SCRTP. Truly, Warwick is a great place to be if you want to understand how ice forms and what can we do to have a say in this process.”

Professor Matthew Gibson, Professor at the University of Warwick in the Department of Chemistry and Warwick Medical School adds:

“We have been working on developing synthetic tools to understand, and interfere with, ice growth processes with an aim of helping develop new cryoprotectants. This work was really exciting, as we made use of biotechnology tools (phage) to discover small, cyclic, peptides which are remarkably potent.

“These peptides are easy to synthesis and modify and will accelerate our research in this field. It also highlights the growing ‘team ice’ collaborative network at Warwick, combining experimental and computation studies together. We are also grateful for the support from the IAS at Warwick, which allowed Dr Stevens to visit us to complete this work, showing the need to support international scientific collaborations.”

The research and development of this has been supported by the European Research Council (638661), EPSRC (EP/P020232/1, EP/R029407/1) the Swiss Science Foundation and the Institute of Advanced Study at the University of Warwick thanks to a Fernades Fellowship.

https://warwick.ac.uk/services/communications/medialibrary/images/april_2021/gibson.sosso_crop.jpg
Caption: Using viruses (phage display) to identify the one molecule in a billion (peptide8) that controls the formation of ice.
Credit: University of Warwick