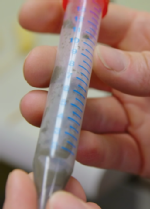 On 5 January Professor Robin Allaby featured in the BBC's Digging for Britain programme. He discussed the DNA testing of sediment from a Mesolithic settlement located on the seabed of the Solent. The analysis determined what was being eaten by the Mesolithic people. The appearance of wheat, 2000 years earlier than previously accepted was a major revelation.
Watch on iPlayer (from 46:10)