A foster mum from Nuneaton has graduated from the University of Warwick’s Centre for Life Long Learning with a first class degree.

Julie Marziano, who is 51, received her BA honours degree in Health and Social Policy during Warwick’s summer graduation ceremonies. 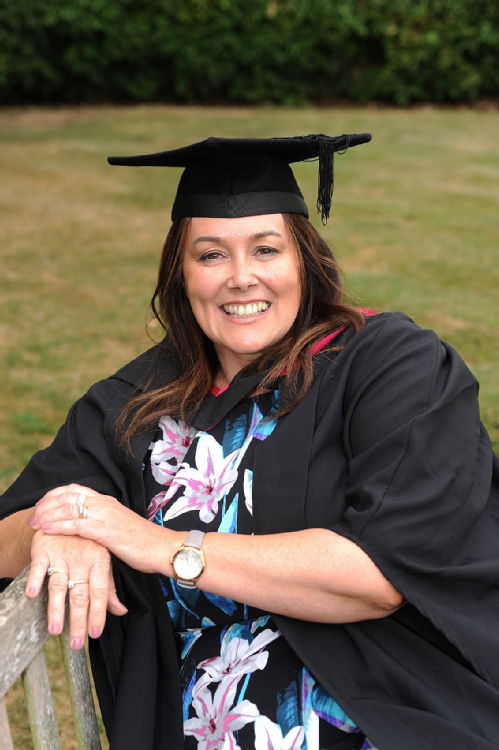 Mrs Marziano, who has two birth children, two adopted and three fostered, is the first person in her family to enter higher education and is inspiring her children and husband, Salvatore, to follow suit.

She said: “I had never even considered that I would study for and graduate with a degree. I only realised it was an option for me when I started looking with my son when he was 17.

"He was considering going to university, and we discovered that I could too.

“As it was, he joined the RAF and I ended up being the one going to university.”

Mrs Marziano gained her degree via the 2+2 route, studying at North Warwickshire and Hinckley College for two years and then the University of Warwick for the final two years of her BA in Health and Social Policy. She originally went to school in Leicestershire but left in 1983, age 16.

She said: “I didn’t know anyone who went to university. Everyone I knew went straight into jobs. It was never really a discussion within my family and the careers advice was go and get a job.

“I don’t regret the route I took - I have had some great jobs, I’ve travelled, I’ve been happily married for 30 years and I’ve loved bringing up the kids, but I always felt there was an outstanding thing that I wanted to do. And actually, studying at this stage in my life, I feel that I was ready – I perhaps couldn’t have done it in my twenties.

“Having been born in Nuneaton, George Eliot's quote, "it's never too late to be what you might have been," has particularly resonated with me during my studies and has continued to inspire my higher education journey.”

Mrs Marziano believes studying for her degree has benefitted the whole family.

She said: “My kids have seen me digging deep, they have even seen me misjudging my deadlines and having to do an all-nighter! They have been so supportive throughout. My husband has been so inspired seeing me achieve this huge goal that he has signed up to begin his studies on the 2+2 too.”

Mrs Marziano intends to continue her studies and has been accepted to study for a master’s degree at Warwick in October and is considering a PhD.

She said: “I am chomping at the bit to get back to studying. It has been life changing for me. My degree ceremony was the first one I have ever attended, but with me continuing to study and my husband and children so inspired to do the same, it won’t be my last.”