SMLC is delighted that 2 of our most engaged researchers' work in public and community engagement has been recognised.

James Hodkinson has won a staff award for his work on community events and arts projects designed to facilitate cross-community encounters, enhance public debate, cross-community empathy and more nuanced mutual understanding between Muslim and non-Muslim communities in towns and cities across the UK.

Abigail Coppins won a Postgraduate award for the ways in which her research into Black prisoners of war in Britain during the French Revolution has had a significant impact on the young Black women at the National Youth Theatre who were involved in the R&D of a new play, The Ancestors. Her research has fed into educational resources for NYT and English Heritage and inspired a delegation of Garifuna people to travel from central America and the US to visit Portchester castle where the prisoners were held. Her work has also introduced Black undergraduates and young people from a community of 2nd generation St Vincentians in High Wycombe to the National Archives. She has, therefore, improved knowledge, strengthened networks, engaged with people from non-traditional backgrounds. 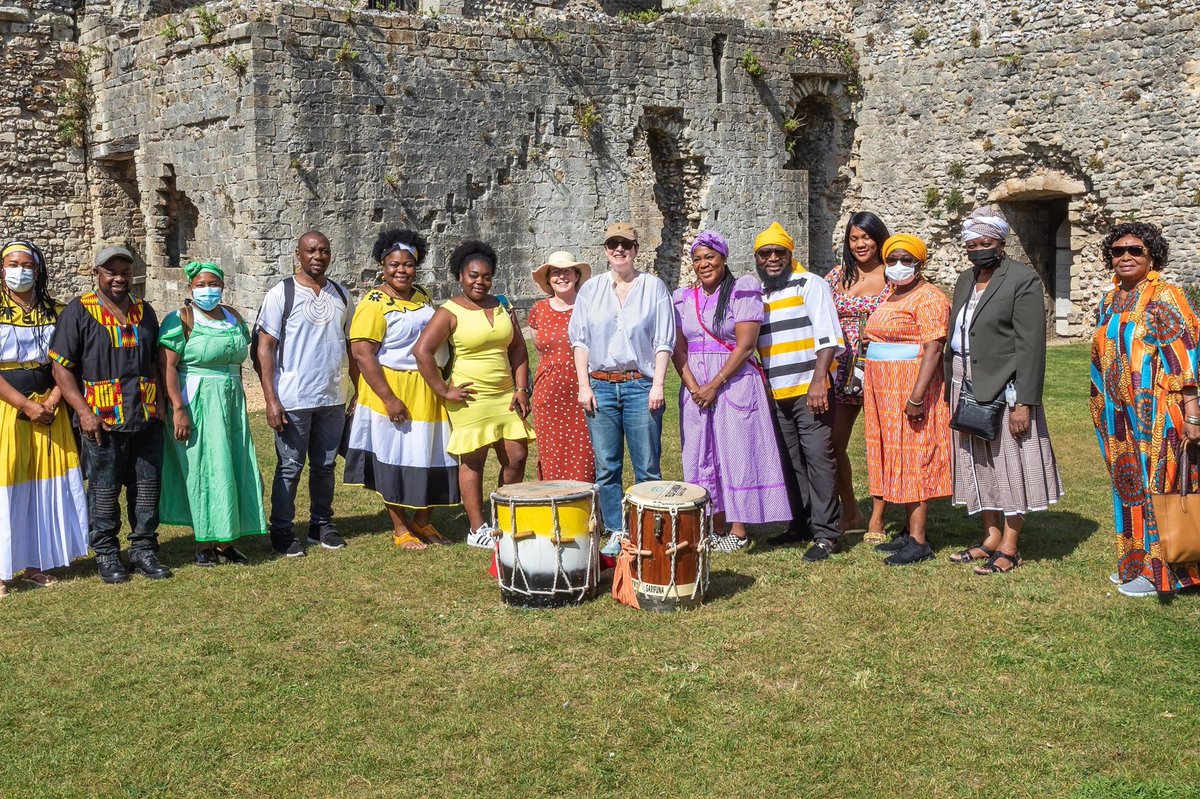 Head of School and Professor of French Kate Astbury and her PhD student Abigail Coppins welcomed a delegation of Garifuna people to Portchester Castle on Wednesday 8th September 2021 to show them the fruits of Abigail's research into the prisoners of war from the Caribbean held their during the Revolutionary wars. You can watch the BBC South report of the visit here: https://www.youtube.com/watch?app=desktop&amp;v=JOVWmfZuDuU

and read the Portsmouth News article about it here: https://www.portsmouth.co.uk/news/people/descendants-of-banished-caribbeans-visit-portchester-castle-to-find-out-about-revolutionary-heroes-3376145

Professor Ingrid De Smet has been admitted as a member of the Academia Europaea (Section of Literary and Theatrical Studies). The Academia Europaea (formed in 1988) is the pan-European academy of science, humanities and letters, with a membership of over 3800 eminent scholars, drawn from all countries of Europe, and all disciplines, nationalities and geographical locations.

Professor Kate Astbury will be on the BBC World Service Thursday 28th March at 9.06am

Professor Kate Astbury will be on the BBC World Service programme The Forum talking about Napoleon Bonaparte this Thursday 28th March at 9.06am UK time. Hosted by Bridget Kendall, the programme also includes contributions from Annie Jourdan (University of Amsterdam) and Rafe Blaufarb (Florida State University).

Congratulations to the Warwick French undergraduate debating team - winners of the 2018 Inter-University French Debating Competition at the Institut français !

An interview with Professor Nick Hewlett on Marx and political violence

Professor Nick Hewlett is interviewed by the State of Nature Blog on Marx and political violence based on his recent book Blood and Progress. Violence in Pursuit of Emancipation

This year’s winners (and the conferences they will organise) are as follows:

‘Bodies in Flux: Rewriting the Body in Medieval Literature, Art and Culture 1000-1450

The winners of the competition are each given a research budget of £400 and a conference budget of £600, and are invited to organise a one-day interdisciplinary conference during the following academic year.

Monday 30th November at 3pm. Room S0:18
The French department in collaboration with Student Careers & Skills has secured a presentation from Mme Chateau the director of the prestigious Ciel school in Brest, Brittany about studying in a French Language school.
The presentation will give students a unique insight into studying French at a Language school in France as well as an overview of the range of study opportunities available to students. Mme Chateau will also give her first-hand experience of the Brittany region and what it is like to work and live in this region of France.
To secure your place, sign up to this event through this link to myAdvantage:
https://myadvantage.warwick.ac.uk/students/events/detail/516620/studying-french-in-language-sc
Mon 23 Nov 2015, 11:03 | Tags: French - News Modern Languages - News French - Impact

Dr. James Hodkinson of SMLC, currently researching Islam in German History, has been invited to take part in an event hosted by Woking People of Faith Interfaith forum, alongside prominent speakers in Woking on November 18th, 7pm.

Congratulations to the winners, runners-up and commended entrants of the Poetry competition organised as part of the 'Troubadours, trouvères and the Crusades' project led by Professor Linda Paterson (French Studies). The standard of entries was especially high; well done to all!

Professor Seán Hand, Head of the School of Modern Languages and Cultures at the University of Warwick, will participate in the international symposium in the HERCuLES series jointly organised by the Academia Europaea and the Wenner-Gren Foundation, on Emerging Models of Learning and Teaching in Higher Education: from Books to MOOCs, at the Wenner-Gren Center Stockholm, from May 21-23, 2015. For more information see here.

Four PhD students in the School have been successful in their bids to win funding from Warwick's Humanities Research Centre to stage their own events and projects.

Congratulations to Professor Ingrid de Smet of Warwick French Studies for having been elected as a Fellow of the British Academy.

Dr Kate Astbury, Associate Professor and Reader in the Department of French Studies, is one of this year's University winners of the Research Impact and Public Engagement Awards, given in recognition of an academic's strong focus on public understanding and involvement in research activity. The list of all winners can be viewed here. Dr Astbury's work especially analyses the French Revolution and the Napoleonic era, and is decribed here.