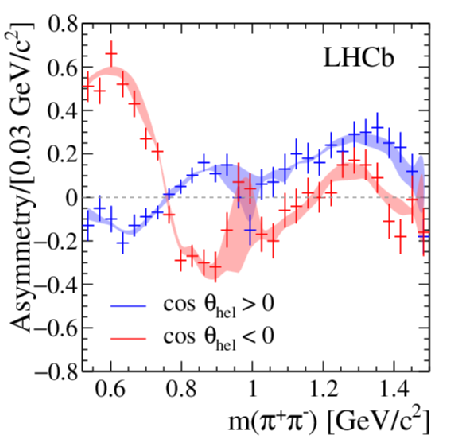 New sources of CP violation (CPV) are needed to explain the absence of antimatter in our matter-dominated universe. Until very recently, observations of CPV in B mesons had only been made in two-body decays. However, it has long been conjectured that the complex dynamics of multi-body decays could give rise to other manifestations. The B+ → π+π+π− decay proceeds mainly via various intermediate resonances — effectively, a cascade of two-body decays. The size of the phase space allows a rich tapestry of resonant structures to emerge, bringing quantum-mechanical interference into play. Much as in Young’s double-slit experiment, the total amplitude comprises the sum of all possible decay paths. The interference pattern can contribute to CPV in regions where resonances overlap. In the new analysis, CPV effects in B+ → π+π+π− decays are described with explicit amplitude models for the first time. As shown in the figure, the models accurately follow the dramatic variation of the asymmetry with the π+π− invariant mass. More details can be found in LHCb papers, arXiv:1909.05211, submitted to PRL, and arXiv:1909:05212, submitted to PRD. The same analysis is also described in the Ph.D. thesis of Warwick student Daniel O'Hanlon, which was awarded the Springer Ph.D. thesis prize in 2018. Tom Latham from the University of Warwick, who worked on the analysis, commented "These results are the culmination of several years of effort to improve the models and account for a number of subtle effects. We now eagerly anticipate the reaction from our theory colleagues that will help us to progress further in understanding CP violation."