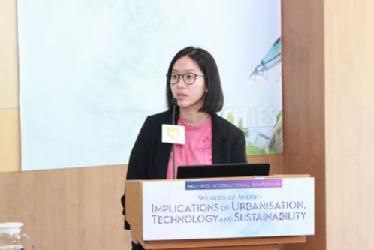 IER's PhD student Joanna Octavia attended the HKU-WES International Symposium on Worlds of Work: Implications of Urbanisation, Technology and Sustainability, held at the University of Hong Kong and hosted by the institution’s Faculty of Social Sciences from September 9th-11st, 2019. The symposium brought together UK, Asia, and Australia-based social science scholars to discuss and reflect on the rapidly changing dynamics and impacts of urbanisation, climate change, technological change and mass migration in the context of work.

In her presentation Joanna talked about “Online Social Networks and Collective Action: Platform-based Motorcycle Taxi Drivers in Indonesia” and explored how platform-based informal workers are using internet communication tools for collective action. She presented evidence of debates on online social networks and how they are taking place within the informal sector of the developing world. She also discussed policy developments in Indonesia and whether these networks have been effective in impacting platform business decisions and regulatory change.

Initial findings suggested that following the rise of the platform business models, nascent forms of online social networks have emerged among some groups of informal workers in developing countries. Recent trends in platform-based informal work show that online social networks, such as social media platforms and instant messaging applications, enable workers to share worker-generated content via messages, images and videos, and that other workers are able to relate to those. There is also evidence that the networks are starting to be perceived as a legitimate form of worker representation by some stakeholders.

Joanna’s participation in the symposium was generously supported by the Early Career Researcher funding from the British Sociological Association and the Work, Employment and Society Journal.