UK universities are evaluated on the quality of their research every six years. The results of the 2014 Research Excellence Framework (REF), announced by the Higher Education Funding Council today, rank Warwick Computer Science 2nd out of 89 UK computing departments.

REF assesses the quality of research outputs (academic papers, software, etc.) and the impact that this research has had (including improvements to society and business). Warwick’s output was ranked the best in the country, while its research impact was ranked joint second (with the University of Cambridge).

We are delighted with this result. Warwick Computer Science produces world-leading research, both in the theoretical underpinnings of computer science and in its translation to real-world problems. Our work over the past six years has created new businesses, developed new standards, generated IP for new products, underpinned national security and defence, and impacted on social policy in education and health.

This result comes on the back of an excellent year. Warwick has been named University of the Year in The Times and Sunday Times Good University Guide 2015, and Warwick Computer Science was recently ranked as one of the best departments in the world in the 2014 QS Worldwide University Rankings. 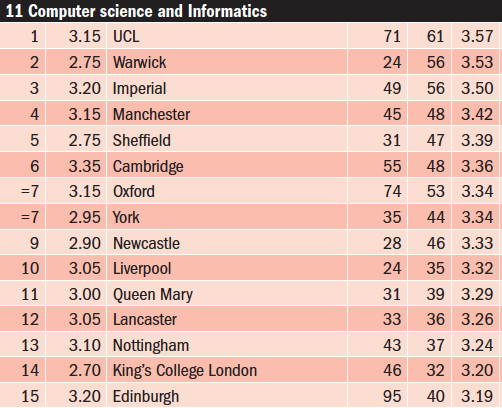