The 39th International Colloquium on Automata, Languages and Programming (ICALP 2012), the main European conference in Theoretical Computer Science, will take place 9 - 13 July 2012 at the University of Warwick, UK.

The conference will see 123 research presentations of recent advances in theoretical computer science selected from 432 submissions in three tracks: A: Algorithms, Complexity and Games, B: Logic, Semantics, Automata and Theory of Programming, C: Foundations of Networked Computation.

The conference is also one of the Alan Turing Centenary Celebration events, celebrating the Life and Work, and Legacy of Alan Turing. Prof David Harel from the Weizmann Institute of Science, will give a special Alan Turing talk during the conference.

During the conference, there will be presented three special awards: EATCS/ACM SIGACT Gödel Prize 2012, EATCS Award 2012, and EATCS Presburger Award 2012.

The main conference will be preceded by a series of workshops taking place on Sunday, July 8:

Celebrating the Life and Work of Alan Turing - 20th June 2012

The Department of Computer Science is proud to present a day of talks celebrating the life and work of Alan Turing, a pioneer in mathematics and the founding father of Computer Science. The day, which marks the centenary of Turing’s birth, will feature lectures from leading academics on Turing’s contributions and their enduring relevance to a broad range of scientific disciplines.

The event is open to all, and attendance from undergraduate and postgraduate students is warmly welcomed. There will be a series of talks on the life and work of Turning, the chance to chat over coffee and buffet lunch.

For more information on the celebration go to http://go.warwick.ac.uk/turing 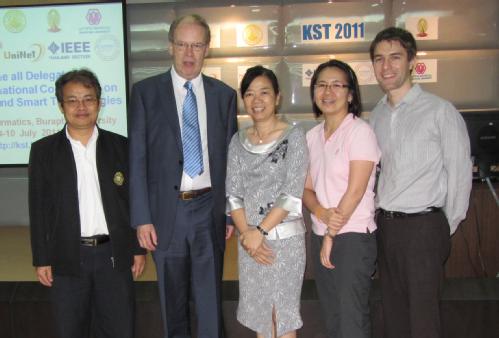 The International Conference on Knowledge and Smart Technologies was held at Burapha University, Thailand on 8th - 10th July. One of the keynote lectures was given by Steve Russ (Knowing and Computing) and the conference was preceded by a day-long workshop on Introduction to Empirical Modelling. The workshop was led by two former PhD students from Warwick Jaratsri Rungrattanaubol and Antony Harfield now both lecturing at Naresuan University, Thailand. The Dean of the Faculty of Informatics at Burapha is Dr Suwanna Rasmequan who also gained her PhD from the Empirical Modelling research group at Warwick.

The main picture shows these three Warwick PhD’s (on the right) with Dr Krisana Chinnasarn (the main conference organiser). Following the conference Steve gave lectures and presentations at Chulalongkorn University, Thammasat University, Sirindhorn Institute of Technology, Naresuan University and the British Chamber of Commerce in Bangkok. A further workshop on Empirical Modelling is planned in Thailand for November 2011.