Examples of talks from Life Sciences

Who discovered DNA? Well, the double act Watson and Crick - right? Well, not according to Kevin and Robert, who will introduce you to a host of “lesser known” pairs that helped to pioneer the discovery, sequencing and understanding of DNA. Exploring historical events, the 100,000 Human Genome project and beyond; this talk literally has “something for everyone” as genetic research paves the way to personalised medical treatments. Even DNA likes a companion – just look at its structure! So, why not bring a friend and come along to find out more about DNA, and who really did discover it!

Nurturing nature – 20 May 7:30-9:30pm - a series of three talks including:
Amy Newman (PhD Student, University of Warwick) - More than dirt: the hidden world under our feet

Many of us give little thought to the soil beneath our feet but it's vital for all life on earth. Amy's talk will unearth some fascinating examples of the microscopic life that's living all around us. Come along to find out about the microbes which helped to create the first plants to colonise the Earth's surface millions of years ago, and to hear about recent advances in scientific methods which show exciting potential for the discovery of new chemicals such as pharmaceuticals. 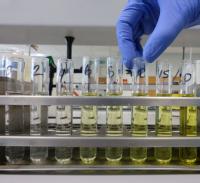 The highly successful Lab Experience day programme in the School of Life Sciences has been running for over 7 years. Students from over 20 different schools and colleges have attended.

This year, the Lab Experience days will be held daily from Monday 1 July to Friday 5 July 2019.

The public science festival, Pint of Science, is coming to Coventry for the first time this year, with experts from the Universities of Warwick and Coventry talking about their research work in a selection of pubs and venues around the city.

There are a number of talks from researchers in the School of Life Sciences:

14 May - Life is the name of the game
Professor Chris Dowson on 'Antibiotic Resistance: No drugs, bad bugs'

15 May - Drink, Drugs and Sunscreen
Professor Kevin Moffat on 'The life of fly - alcohol, sex and violoence!'

16 May - The future of health
Dr Andrew Nelson on 'Invasion of trophoblasts: maintaining prenancy'
Dr Corinne Hanlon on 'Synthetic Biology - who draws the line'

Reaching out at New Scientist Live

The School of Life Sciences, Engineering and Physics are teaming up this week to deliver exciting outreach activities at New Scientist Live.

Taking place from Thursday 28 September – Sunday 1 October at the ExCeL London, New Scientist Live sets out to be ‘the world’s most exciting festival of ideas’, attracting over 22,000 science curious visitors to the event. When an exhibitor space became available, the School of Life Sciences Outreach Team, led by Professor Kevin Moffat, were quick to seize this opportunity to showcase cutting edge research and study at Warwick.

Our activities at the stand cluster broadly around the theme of Antimicrobial Resistance, spanning timescales from medieval plagues to contemporary Tuberculosis and futuristic treatments using viruses to cure infection. Our exciting line up includes a virtual reality protein explorer, plague-infested Jelly Babies propelled from trebuchets, an ‘Electronic Nose’ that can sniff out your breath, a pestilent poetry competition…

You can find out more about Warwick activities at New Scientist Live at www.warwick.ac.uk/newscientistlive

The microbes on us and around us: We can't see them but can't live without them

We all have one, but what is a microbiome? Come and find out at the School of Life Sciences Public Science Evening on Tuesday 2 May.

The event will explore the impact of the microbiome on animals, plants and humans and the huge impact that your microbiome has on you and your health. Come and discover how we can manipulate microbiomes to reduce the spread of antibiotic resistance.

This event is led by Professor Elizabeth Wellington and follows on from our highly successful Public Science Evenings covering topics such as Neurobiology, Antibiotic Resistance and Plant Pathogens.

The event will include a variety of talks, lab tours and interactive stalls as well as the chance to speak to experts in this field. Light refreshments will be provided. The event will take place in the School of Life Sciences Atrium, Gibbet Hill Campus from 18:00 – 20:00.

Come and join us to find out more about TB, and the research that we are doing. There will be the opportunity to talk to people from the lab, take part in a number of competitions to win a tuberculosis petri dish (sponsored by Giant Microbes) and also win a voucher for the best selfie taken in our World TB Day Instaframe that is uploaded to the twitter #WarwickTB. There will be leaflets, balloons and stickers and an interactive activity featuring the 'Big Mouth' clown. Come and join us!

Learn more from our TB video

Any questions, please get in touch with warwickTB@warwick.ac.uk

On the afternoon of Friday 25 November 2016, Professor Kevin Moffat led a Public Science screening of the critically acclaimed arthouse film ‘The Fly Room’. This film centered around the famous Fly Room at the University of Columbia, run by Dr Thomas Hunt Morgan. It was here that the basic laws that govern heritability and the passing of traits were discovered – work that would eventually win their lab a Nobel Prize in 1933 and formed the foundation of the genetic discoveries that continue today. The focus of the film was on Dr Calvin Bridges and his daughter Betsy, and how their relationship evolved after a father-daughter visit to the lab. This film mixed science and arts in an attempt to not only engage the audience with the scientific story of genetics but also the social story about the relationship between a father and daughter.

After the film showing a Q&A with the director Alexis Gambis was held. Following that, a poster discussion about current Drosophila research from various West Midlands genetics researchers took place.

Feedback from local residents and attendees was incredibly positive with many approving of the film:

‘Beautiful and intriguing. I loved the interplay between past and present, memories, dreams and reality’

'Beautifully filmed piece on the analysis between relationships and science, with a great non-linear narrative’

‘Very engaging I loved the photography and the portrayal of characters and their relationships. Great alternative to a factual lecture in a sterile environment. The music score was great and enhanced the film, especially it’s gentle background presence. This film is a very effective medium to deliver a message, a story and idea. People enjoy stories’

‘Showing a film about science and relationships to an audience of scientists and non-scientists, the duality was there for the viewers as in the film. This is the best way to communicate science to the community’

Why not come to one of our future public science events? For details visit www.warwick.ac.uk/lifesci/outreach/publicscievents

Free film screening of The Fly Room on Friday 25 November

On Friday 25 November, the School of Life Sciences has sponsored a free showing of the critically acclaimed arthouse film ‘The Fly Room’ in the Warwick Arts Centre Cinema. This film explores the relationship between a father and daughter as the father spends all of his time in ‘The Fly Room’, where is he responsible for the discovery of modern day genetics.

This film has a very limited release and the director is coming especially over from the USA to do a Q&A at the end. If you would like to know more about the film please visit www.theflyroom.com

TICKETS ARE FREE.
Sign up to attend at www.warwick.ac.uk/giving/news/slsflyroom

Scientific laboratories at the University of Warwick are once again being opened up to members of the public – giving YOU behind-the-scenes access to cutting-edge research happening in Coventry.

Over the next year, the School of Life Sciences is running a series of open events, allowing the local community to come along and find out how the natural world works – from our superbrains to superbugs!

The next event, ‘Getting to grips with antibiotic resistance’, will explore the international threat of antimicrobial drug-resistant bacteria – which are predicted to kill more people than cancer by 2050. 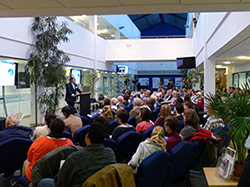 On the evening of Tuesday 11 October Professor Nick Dale organised a public science event devoted to the human brain.

Members of the public were given the chance to find out about the cutting-edge neuroscience research taking place at the University of Warwick. Researchers gave demonstrations of science in action and tours of our laboratories. The event, ‘A healthy brain for a healthy life’, gave visitors the opportunity to find out how we can keep our brains in shape as we get older and how to put things right when the brain goes wrong.

There was also a demonstration of how our sense of self can be tricked into adopting inanimate objects, and a Q&A session where people found out about all those brain queries they wanted to know but were too afraid to ask!

If you missed this opportunity to visit the School of Life Sciences, other events will be running throughout the year including: 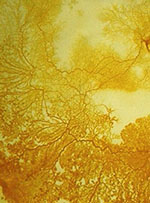 As part of British Science Week, members of Life Sciences took part in the Big Bang UK Young Scientists & Engineers Fair held at the NEC 16-19 March. Representing the Faculty of Science, staff and students from Life Sciences joined colleagues from Chemistry, Engineering and Physics to demonstrate science to children, parents and teachers.

Visitors were able to meet Mazie and learn about the fascinating life of this slime mold.

For more details about this interesting slime visit the Knowledge Centre - The many-headed-slime;It's alive!

Warwick welcomes the next generation of scientists 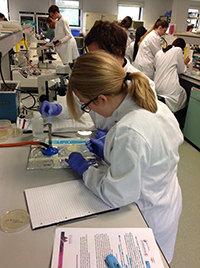 This week the School of Life Sciences welcomes the next generation of scientists from across the United Kingdom as part of a Headstart Summer School.

Taking place between the 19-23 July at the University’s Gibbet Hill campus, the Headstart Life Sciences course will provided the 17 year olds the opportunity to explore different biological disciplines taught within the School of Life Sciences and introduce them to a flavour of the academic side of undergraduate life. 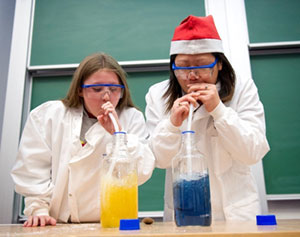 Warwick is hosting a series of six engaging and accessible lectures, open to all, over the festive period from 3-10 December 2014. Join our academics for fantastic new ideas, explosions and experiments.

Dr Miriam Gifford, representing the School of Life Sciences, will present a lecture entitled 'Talk Amongst Your Cells' on Monday 8 December. Animals and plants are made up of many different cells that have to work together to enable living things to grow… So cells have to talk to each other, even the cells in slime mould! Come with us to play ping pong and Chinese whispers to give you a cell’s eye view of trying to make yourselves heard! Book your tickets 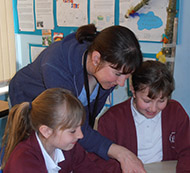 Ann Price from Warwick Crop Centre, part of the School of Life Sciences, went to Hampton Lucy School on Tuesday 7th May to give a talk to years 5 and 6 about her work in the Genetic Resources Unit. The Warwickshire primary school children learned about vegetable seeds, pollination and growing plants. The children really enjoyed Ann’s talk, and it fitted in well with their horticulture lessons and their vegetable garden work.

To find out more about what we can offer your school or community group contact life.sciences@warwick.ac.uk