The presence of planetary material in white dwarf atmospheres, thought to be accreted from a dusty debris disc produced via the tidal disruption of a planetesimal, is common. Approximately five per cent of these discs host a co-orbital gaseous component detectable via emission from atomic transitions - usually the 8600 Angstrom CaII triplet. These emission profiles can be highly variable in both morphology and strength. Furthermore, the morphological variations in a few systems have been shown to be periodic, likely produced by an apsidally precessing asymmetric disc. Of the known gaseous debris discs, that around HE1349-2305 has the most rapidly evolving emission line morphology, and we present updated spectroscopy of the CaII triplet of this system. The additional observations show that the emission line morphologies vary periodically and consistently, and we constrain the period to two aliases of 459±3d and 502±3d. We produce images of the CaII triplet emission from the disc in velocity space using Doppler tomography - only the second such imaging of a white dwarf debris disc. We suggest that the asymmetric nature of these velocity images is generated by gas moving on eccentric orbits with radially-dependent excitation conditions via photo-ionisation from the white dwarf. We also obtained short-cadence (~ 4 min) spectroscopy to search for variability on the time-scale of the disc's orbital period (~ hours) due to the presence of a planetesimal, and rule out variability at a level of ~ 1.4 per cent.

White dwarfs which exhibit transit signatures of planetary debris and accreted planetary material provide exceptional opportunities to probe the material composition and dynamical structure of planetary systems. Although previous theoretical work investigating the role of minor body disruption around white dwarfs has focussed on spherical bodies, Solar System asteroids can be more accurately modelled as triaxial ellipsoids. Here we present an analytical framework to identify the type of disruption (tidal fragmentation, total sublimation or direct impact) experienced by triaxial asteroids approaching white dwarfs on extremely eccentric (e ~ 1) orbits. This framework is then used to identify the outcomes for simplified Main belt analogues of 100 bodies across five different white dwarf temperatures. We also present an empirical relationship between cooling age and effective temperature for both DA and DB white dwarfs to identify the age of the white dwarfs considered here. We find that using a purely spherical shape model can underestimate the physical size and radial distance at which an asteroid is subjected to complete sublimation, and these differences increase with greater elongation of the body. Contrastingly, fragmentation always occurs in the largest semi-axis of a body and so can be modelled by a sphere of that radius. Both fragmentation and sublimation are greatly affected by the body's material composition, and hence by the composition of their progenitor asteroid belts. The white dwarf temperature, and hence cooling age, can affect the expected debris distribution: higher temperatures sublimate large elongated asteroids, and cooler temperatures accommodate more direct impacts.

White dwarf planetary science is a rapidly growing field of research featuring a diverse set of observations and theoretical explorations. Giant planets, minor planets, and debris discs have all been detected orbiting white dwarfs. The innards of broken-up minor planets are measured on an element-by-element basis, providing a unique probe of exoplanetary chemistry. Numerical simulations and analytical investigations trace the violent physical and dynamical history of these systems from au-scale distances to the immediate vicinity of the white dwarf, where minor planets are broken down into dust and gas and are accreted onto the white dwarf photosphere. Current and upcoming ground-based and space-based instruments are likely to further accelerate the pace of discoveries.

The post-main-sequence fate of the HR 8799 planetary system

The noteworthy four-planet HR 8799 system teeters on the brink of gravitational instability and contains an A-type host star which is characteristic of the progenitors of the majority of known white dwarf planetary system hosts. Gozdziewski and Migaszewski (2020) have demonstrated that the system can retain all four planets for at least 1 Gyr along the main sequence if the planets evolve within an externally unperturbed 8:4:2:1 mean motion resonance configuration. Here we propagate forward their most stable fit beyond the main sequence, and incorporate external effects from Galactic tides and stellar flybys. We find that (i) giant branch mass loss always breaks the resonance, and usually triggers the ejection of two of the planets, (ii) stellar flybys and Galactic tides rarely break the resonance during the main-sequence and giant branch phases, but play a crucial role in determining the final planetary configurations around the eventual white dwarf host star, and (iii) the meanderings of the surviving planets vary significantly, occupying regions from under 1 au to thousands of au. The ubiquitous survival of at least one planet and the presence of the debris discs in the system should allow for dynamical pathways for the white dwarf to be metal-polluted.

Fomalhaut C (LP 876-10) is a low mass M4V star in the intriguing Fomalhaut triple system and, like Fomalhaut A, possesses a debris disc. It is one of very few nearby M-dwarfs known to host a debris disc and of these has by far the lowest stellar mass. We present new resolved observations of the debris disc around Fomalhaut C with the Atacama Large Millimetre Array which allow us to model its properties and investigate the system's unique history. The ring has a radius of 26 au and a narrow full width at half maximum of at most 4.2 au. We find a 3σ upper limit on the eccentricity of 0.14, neither confirming nor ruling out previous dynamic interactions with Fomalhaut A that could have affected Fomalhaut C's disc. We detect no 12CO J=3-2 emission in the system and do not detect the disc in scattered light with HST/STIS or VLT/SPHERE. We find the original Herschel detection to be consistent with our ALMA model's radial size. We place the disc in the context of the wider debris disc population and find that its radius is as expected from previous disc radius-host luminosity trends. Higher signal-to-noise observations of the system would be required to further constrain the disc properties and provide further insight to the history of the Fomalhaut triple system as a whole.

Hiding Signatures of Gravitational Instability in Protoplanetary Discs with Planets

We carry out three-dimensional smoothed particle hydrodynamics simulations to show that a migrating giant planet strongly suppresses the spiral structure in self-gravitating disks. We present mock Atacama Large Millimeter/submillimeter Array (ALMA) continuum observations that show that in the absence of a planet, spiral arms due to gravitational instability are easily observed. Whereas in the presence of a giant planet, the spiral structures are suppressed by the migrating planet resulting in a largely axisymmetric disk with a ring and gap structure. Our modeling of the gas kinematics shows that the planet's presence could be inferred, for example, using optically thin 13C16O. Our results show that it is not necessary to limit the gas mass of disks by assuming high dust-to-gas mass ratios in order to explain a lack of spiral features that would otherwise be expected in high-mass disks.

Spirals, shadows and precession in HD 100453 - II. The hidden companion

We carry out three-dimensional SPH simulations to study whether planets can survive in self-gravitating protoplanetary discs. The discs modelled here use a cooling prescription that mimics a real disc which is only gravitationally unstable in the outer regions. We do this by modelling the cooling using a simplified method such that the cooling time in the outer parts of the disc is shorter than in the inner regions, as expected in real discs. We find that both giant (> M_Sat) and low mass (< M_Nep) planets initially migrate inwards very rapidly, but are able to slow down in the inner gravitationally stable regions of the disc without needing to open up a gap. This is in contrast to previous studies where the cooling was modelled in a more simplified manner where regardless of mass, the planets were unable to slow down their inward migration. This shows the important effect the thermodynamics has on planet migration. In a broader context, these results show that planets that form in the early stages of the discs' evolution, when they are still quite massive and self-gravitating, can survive.

The liftetimes of planetary debris discs around white dwarfs 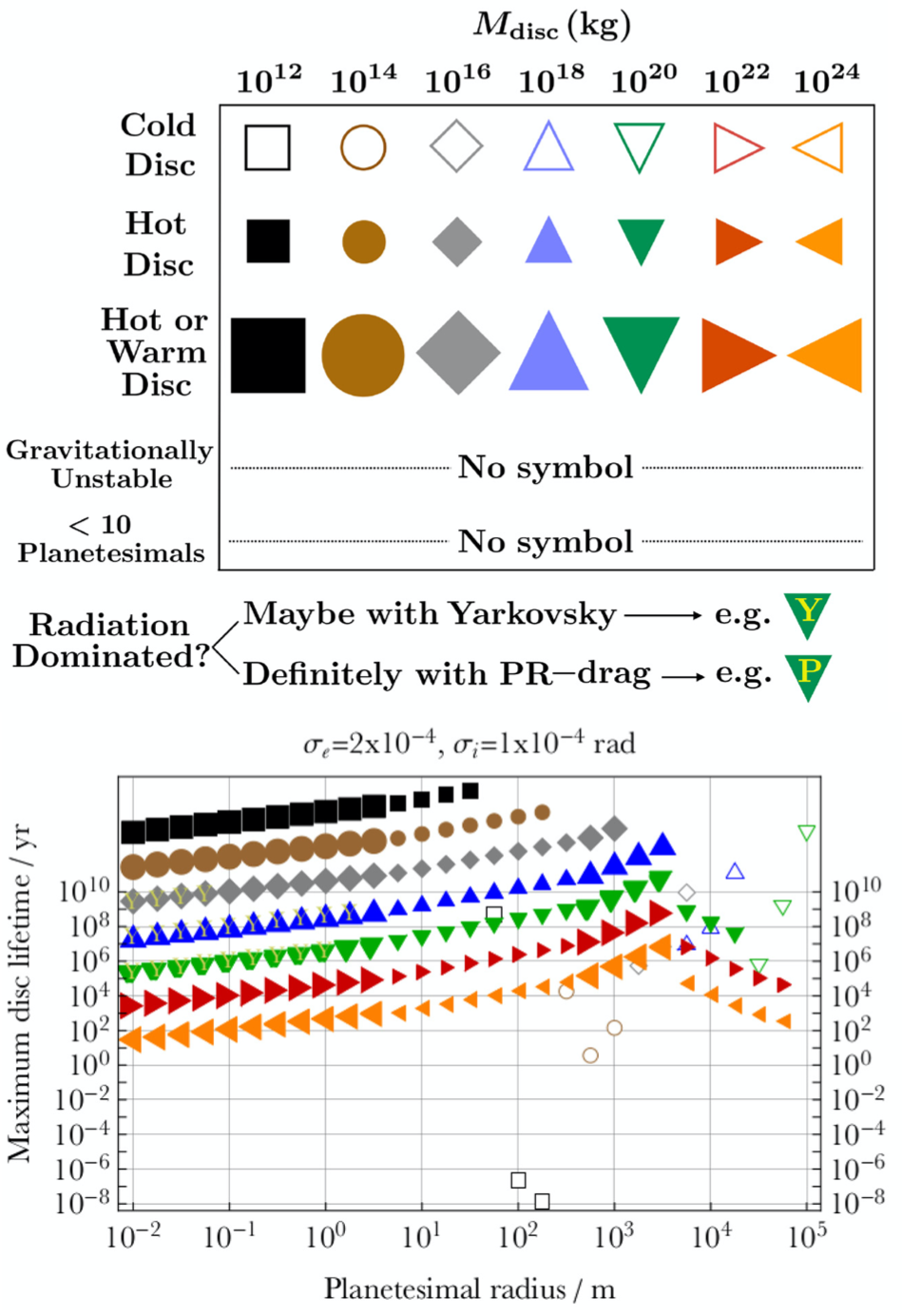 The lifetime of a planetary disc that orbits a white dwarf represents a crucial input parameter into evolutionary models of that system. Here we apply a purely analytical formalism to estimate lifetimes of the debris phase of these discs, before they are ground down into dust or are subject to sublimation from the white dwarf. We compute maximum lifetimes for three different types of white dwarf discs, formed from (I) radiative YORP break-up of exo-asteroids along the giant branch phases at 2-100 au, (II) radiation-less spin-up disruption of these minor planets at R⊙, and (III) tidal disruption of minor or major planets within about R⊙. We display these maximum lifetimes as a function of disc mass and extent, constituent planetesimal properties, and representative orbital excitations of eccentricity and inclination. We find that YORP discs with masses of up to 1024 kg live long enough to provide a reservoir of surviving cm-sized pebbles and m- to km-sized boulders that can be perturbed intact to white dwarfs with cooling ages of up to 10 Gyr. Debris discs formed from the spin or tidal disruption of these minor planets or major planets can survive in a steady state for up to, respectively, 1 or 0.01 Myr, although most tidal discs would leave a steady state within about 1 yr. Our results illustrate that dust-less planetesimal transit detections are plausible, and would provide particularly robust evolutionary constraints. Our formalism can easily be adapted to individual systems and future discoveries. 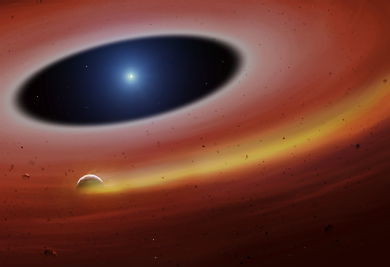 Many white dwarf stars show signs of having accreted smaller bodies, implying that they may host planetary systems. A small number of these systems contain gaseous debris discs, visible through emission lines. We report a stable 123.4-minute periodic variation in the strength and shape of the Ca II emission line profiles originating from the debris disc around the white dwarf SDSS J122859.93+104032.9. We interpret this short-period signal as the signature of a solid-body planetesimal held together by its internal strength.