“Film is … probably the best option

if you actually want to change the world,

not just re-decorate it.”

When I started Screening Rights Film Festival back in 2015, I was in the midst of a major rethink of what I thought the value was of being an academic. My research and teaching had always revolved around the socio-political role of culture, but years of banging on about the same old things – of moaning, basically – had dampened my optimism and I wanted to turn these concerns outwards, beyond books and classrooms to more concrete applications. I wanted to extend my analyses and theorisation of the influence of film within a wider arena. I wanted to feel, and harness, its impact. So I distilled my intellectual agenda down into a single question that has come to frame my various projects in the last five years: what is film’s potential to affect, or even effect, personal, social or political change?

One of these projects is Screening Rights, the Midlands’ first international festival of social justice film. It explores and exploits this potential by bringing some of the most compelling recent films to the region, and by opening them up fully for discussion through the high-powered, expert-filled, panels following every screening. The festival is not about sharing the world’s worthiest or bleakest films or spreading the love of noble intentions. It is about harnessing the power of film to entertain, educate and inspire change; to nudge us to do as well as think and feel. At the same time, while it is usually sympathy, fury or fear that is produced, and temporarily so, the power of film – and of the debate on and through film – to move us to think or feel differently should not be underestimated. And there is something really important, and particularly affecting, too about the space of cinema – the collective, perhaps contagious, concern mustered in a packed and darkened space. So what then for the festival, if the cinemas are closed? If public, proximate, gatherings, if the very ‘live-ness’ and ‘lived-ness’ that gets animated in an auditorium, can’t happen. This was one of the challenges of the sixth run of SRFF that took place in October 2021. There were others, of course, such as the cancellation of the other film festivals through which I normally secure and programme content and, most pertinently, the freezing of funds from the BFI’s West Midlands film hub that SRFF normally relies upon to run.

Fortunately, I was able to gain funding from the Humanities Research Fund in collaboration with the Connecting Cultures GRP so the show could still go on. This funding, which enabled the appointment of festival coordinator, Dr Ania Ostrowska, was to enhance and develop SRFF’s digital presence and activities, and to ensure delivery both of the 2020 festival, as its first online edition, and of two pre-festival special screening events. These events were supported by City of Culture and were to give us an opportunity to experiment with and perfect the use of the new forum and format – in other words, to figure out what the hell we were doing before the virtual curtains-up at the end of October.

Our first pre-festival event responded to the other big issue of the year: Black Lives Matter.

Between 1969 and 1999 over a thousand people died in police custody in England. Not one police officer has ever been convicted for any of these deaths. On Thursday 30 July our first special pre-festival ‘screening’ was the British documentary, Injustice (2001), by Ken Fero and Tariq Mehmood, which follows the struggles for justice by the families of some of those who have died in police custody. The filmmakers joined a stellar panel that included Marcia Willis Stewart QC, an inquest specialist and prominent civil rights lawyer, who, most relevantly perhaps, represented Mark Duggan’s family, and Janet Alder, sister of Christopher Alder, a former paratrooper, who died at a Hull police station in 1998. The panel was chaired by Professor Rajinder Dudrah from Birmingham City University, and in typical SRFF fashion – despite the digital domain – was riveting, informative, warm and urgent. Not something that a screenshot can capture however - but you can watch the panel here.

Our second pre-fest event, on October 8th, was similarly successful. The streaming of Seahorse: The Dad who gave Birth (Jeanie Finlay, 2019) was followed by an extraordinarily honest and provocative discussion of the film. Chaired by Warwick’s Dr Cath Lambert, the protagonist of Seahorse, Freddie McConnell, was joined by Jake Edwards from trans organisation, Mermaids, and academic Dr Elliot Evans from the University of Birmingham.

There is something quantifiably different about the nature and quality of a Screening Rights event. I would say that, I guess. But it seems to me… and this has often been confirmed by panel and audience participants… that the mix of personal and professional, but always impassioned, expertise fuels especially productive discussions. Going digital seemed to alter this not at all (though due to zoom-fatigue and many other variables, our audience numbers did take a hit). Indeed, I'd suggest that it even unleashed new levels of connection and heights of effect. Firstly, it enabled many more international filmmakers and protagonists to join us than would normally be the case... strapped for cash as we normally are. There is nothing better than the horse's mouth. Secondly, there is something strangely intimate, animated and animating about the 'digital discussion' when it is done well - that is, when the field is populated with a group of excellent other creatures too (as well as the horse that is).

The festival itself contained six important new films from across the globe that were streamed and discussed across the four days of the online programme in October.

We were keen that this year's festival contained more moments of uplift than might usually be encountered in SRFF screenings. It felt necessary. Two films in particular stand out in this regard: Deepti Gupta's Shut Up Sona about famous Indian singer and activist, Sona Mohapatra, and Rodney Evan's Vision Portraits about visually impaired artists. 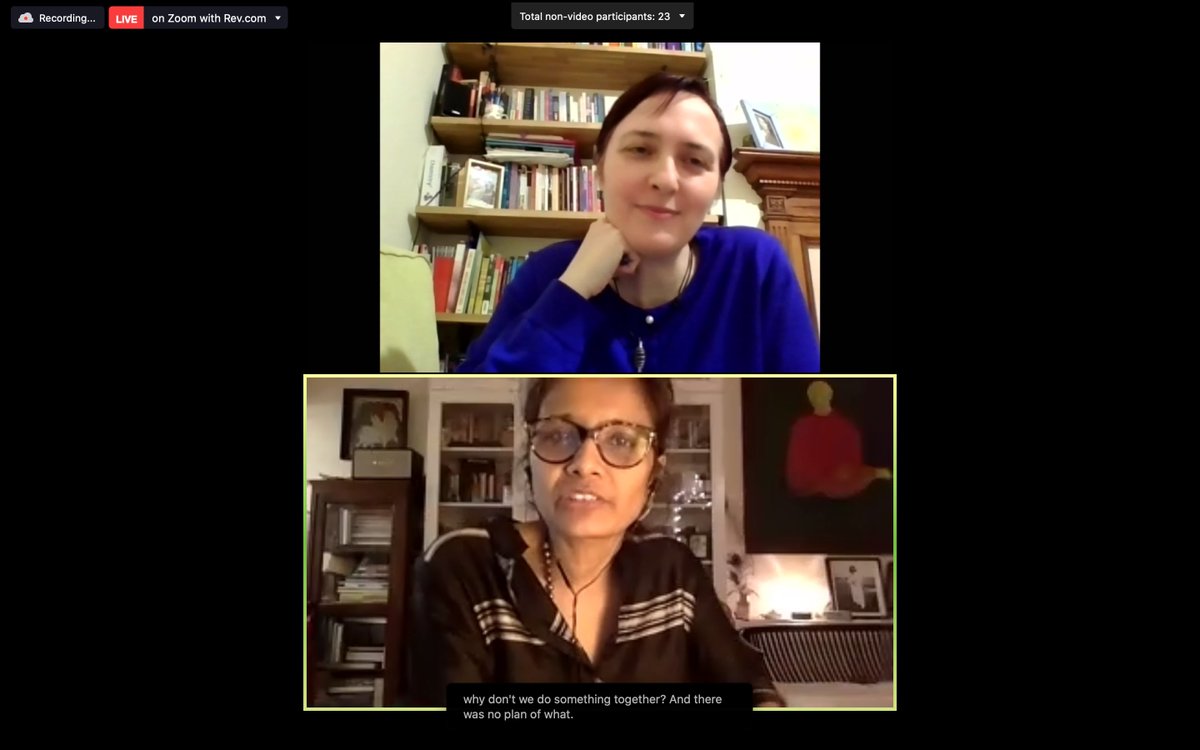 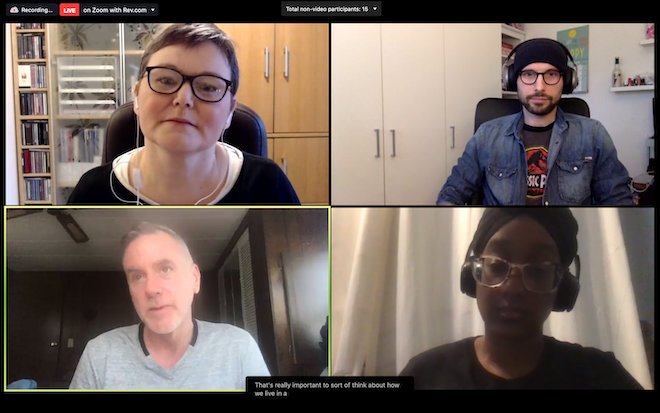 My favourite session of the 2020 festival and, I think, of all the festivals so far, was the post-streaming panel on Carolina Corral's To See You Again (2020). In 2016 the Mexican District Attorney secretly buried more than 100 bodies of people murdered during the war against drug trafficking. The film tells of the participation of Mexican women in learning about forensic work and exhuming what remains of the corpses, helping to discover the crimes committed by the state. The collective behind the film - the feminist filmmakers and forensics-trained mothers - joined us ...by which I mean, here, they joined us even from the field via a smart phone held aloft to reveal a pick-axe laden shoulder. You can see one of the protagonists in the bottom row on the right, below, her disposable hair cover just showing under her hood. Never before had the immediacy of the issues under discussion been so vividly felt. We the audience were there with the protagonists in a way previously inconceivable. 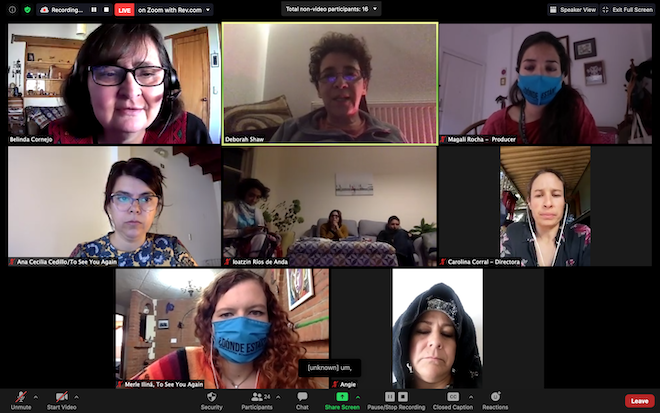 The audience that evening included a group of Mexican students currently studying at the University of Bristol (you can see them right in the middle of the screenshot above). When they came to speak to the collective, they wept their gratitude for the women's efforts and offered what professional resources they had for the furthering of their grassroots campaign. There wasn't anyone unshaken by - or unaligned with - their outpourings in the 'room'. Now that's what I call impact.

All of the panel discussions are available through the festival's youtube channel. I'd like to sign off by thanking the GRP for having made this possible, and all the participants, on panels and in the audience, for their generosity of time, heart and spirit.