The way ahead is challenging our deep-rooted assumptions.

Poetry can help us challenge preconceived notions of the thoughts, contexts, and beliefs of societies throughout history. Through my work at the University of Warwick, I explore aspects of poetry that have previously been untouched. Research into Poetry and Poetics can shed an important light on the many ways poetry influences modern life.

My book, Christina Rossetti: Poetry, Ecology, Faith (Oxford University Press, 2018), was born from a desire to demonstrate the influence of Christianity in the eighteenth and nineteenth centuries in making space for female writers, as well as bringing together ecological politics with poetry.

Prior to writing my book, I was familiar with Rossetti’s religious writing, and, like many academics, had become interested in current critical work on the environment. I didn’t fully appreciate the relationship between religion and ecology until writing the book. As I researched Rossetti, I realised that her work revealed a Christian ecological politics with origins in the early Church. 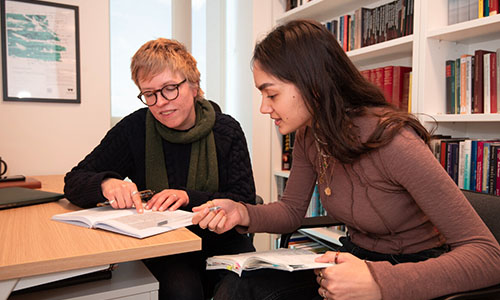 Theology is a subject area that has long been aware of Christianity’s radicalism, one that is sometimes recognised in literary studies but not always. As a result of the urgency of environmental politics, and Christianity having myriad ways to rethink the global structures that lead to the inequality on which environmental destruction is based, I hope that my work will open out the importance of religion in the modern world.

Research, and the sharing of my ideas, has not always been an easy path. Along the way there have been several challenges that I have had to overcome. The first is that it can prove difficult to convince those interested in environmental politics of the significance of Christian theology to their thinking as well as solutions to climate change. Secondly, it is also true that many who claim to practice Christianity have done a great deal of damage in respect to the treatment of nature and creation. Ensuring this is acknowledged whilst simultaneously identifying a current of radical ecological politics from the early Church into the nineteenth century has been an interesting pursuit.

As a committed Roman Catholic and advocate of green politics, this topic is of particular interest to me. I find that Christianity and ecological politics are entwined in my everyday life, so it has been fascinating to explore the origins of this previously ignored topic.

The University of Warwick has been a wonderful supporter of my research and I am grateful to work alongside fantastic colleagues and students. The research I have undertaken relates to our Poetry and Poetics group here at Warwick; and is also connected to our Comparative Religions and Literatures (CoRAL) group, one that broadly “promotes the reciprocal and dynamic relationship between religions, literatures and cultures”.

My research has helped unveil a different picture of nineteenth-century Christianity and the ways in which it facilitated female writers to prove their intellectual and aesthetic abilities. I have found it important to showcase both this and Christianity’s connection to ecological politics as it presents a different perspective on the period and demonstrates the foundations of ecological thought in the Church. I hope this illustrates just one of the many reasons why research in the Poetry and Poetics sector is such a timely and important topic and the influence it can have on academic thought today.

Find out more about the department and the research and teaching taking place.

Explore the English related research taking place at Warwick and the researchers working to better the world.

Tackling issues across the Sciences, Arts, and Social Sciences. Discover how we're changing lives through our research.