Pantita Palittapongarnpim joins us as a postdoc, having completed her PhD at the University of Calgary working with Barry Sanders.

Francesco, Aiman and Andrew join us

Francesco Albarelli joins us as a postdoc having completed his PhD at Università degli Studi di Milano working on quantum metrology with Matteo Paris. Aiman Khan joins us as a PhD student following an Integrated Masters in physics at the Indian Institute of Technology-Roorkee on a Chancellor's International Scholarship. Andrew Jackson joins us doing research pending completion of his MPhys from the University of York.

Animesh recognised as an outstanding reviewer

Animesh has been recognised as an outstanding reviewer for the New Journal of Physics in the IOP's 2017 Reviewer Awards. The Outstanding Reviewer awards seek to recognise excellent reviewers for quality, quantity and timeliness of their reviews which contribute to the peer-review process.

Evangelia has joined us after a masters at the University of Athens where she worked on quantum optics, to begin a PhD in quantum metrology which is funded by the QuantIC hub.

Max Marcus joins as a postdoc

Max joins us to work on quantum biology and energy transport, having completed his DPhil in Physical and Theoretical Chemistry at the University of Oxford

Shibdas Roy joins as a postdoc

Shibdas joins us from NUS where he was a postdoc in Mankei Tsang's group, having previously completed his PhD at the University of New South Wales, Australia. His primary research interest is in quantum measurement and control theory.

Samuele, Jamie and Luke join us

Samuele and Jamie start their PhDs with us this week. Samuele joins us from the University of Turin. He will be working on quantum verification and is supported by the UK Quantum Technology hub NQIT. Jamie joins us from Aberystwyth University. He will be working on quantum-enhanced sensing, and is supported by the CDT on Diamond Technologies. Luke will continue his BSc project work in quantum biology on to an MSc with us.

Theodoros Kapourniotis joins as a postdoc

Theodoros worked on his PhD with Elham Kashefi at the University of Edinburgh's School of Informatics. He completed his PhD is early 2016, and his specialisation lies in the area of verification methods for quantum computation.

George Knee joins on an 1851 Fellowship

George completed his PhD from Oxford with Simon Benjamin and Andrew Briggs in 2014. He then spent a year at NTT in Japan. He was awarded the very presitgious 1851 Research Fellowship in 2015.

Dominic finished his undergraduate degree in Oxford, where he did a Master's project in quantum optics and quantum information.

The Editorial Board acknowledges Animesh Datta among the top 5% of referees and award this certificate of recognition to mark his dedication and professional excellence within the journal. 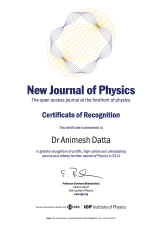 Christos Gagatsos joins us as a postdoc.