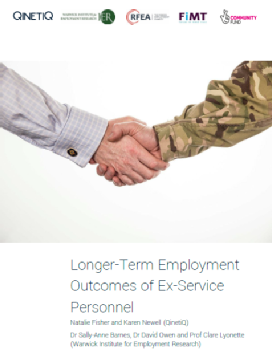 The research found that while the majority of ex-Service personnel maintain employment over time, it can often involve numerous jobs and periods of unemployment. Not all ex-Service personnel reported being satisfied with their civilian job or career; less than half (44.5%) felt that they found the ‘right job’ for them in the longer-term and which maximises their potential (42.5%) or provides them with opportunities to progress (42.4%).

The research recommends several initiatives to better prepare Service leavers for the civilian labour market and to ensure that employers can take advantage of this skilled cohort. They include:

Some groups face greater challenges when leaving the Armed Forces, making them more likely to experience unsuccessful employment in the longer-term. This includes women, ethnic minorities, those who are wounded, injured and sick, and older Service leavers. In addition to demographic factors, unrealistic expectations of the civilian job market, a lack of transferrable skills and an inability to adapt to civilian environments were all found to persist over the longer-term and reduce the chances of a successful transition out of the Armed Forces.