How can skill systems in Europe reduce the level of skills mismatch in labour markets?

IER's Professor Terence Hogarth has successfully secured Horizon Europe funding for his project Skills2Capability. The project is about understanding how skill systems across Europe can reduce the level of skills mismatch in their labour markets. 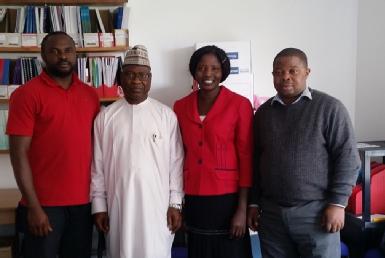 IER has been commissioned by the Nigerian Government’s Industrial Training Fund (ITF) to provide training to its staff to help them develop labour market analysis in Nigeria.

The Nigerian Government wants to broaden its economic base. Currently there are gaps in labour market information and capacity to develop that information. The ITF approached IER to provide training to enable them to establish better and more policy-orientated employment research. IER hosted 5 visitors from the ITF over June and July 2017 including the Director General of the ITF, Sir Joseph Ari.

Regarded as a success by Sir Joseph Ari, IER will now work with the ITF to expand the training programme over the rest of this year and into 2018.

Analysis of major parties' manifestos and implications for Wales

In the first of IER's blog posts on what the major parties have to say about their spending plans, Wales Public Services 2025 look at Labour UK and Plaid Cymru's pledges, and what this might mean for public services in Wales.

Although the political parties are issuing individual policy commitments day by day, Wales Public Services 2025 is concentrating on the published manifestos and their implications for public spending and public services in Wales. In this blog post we are looking at the two manifestos released on Tuesday 16 May by Plaid Cymru and the UK Labour Party, although we will need to wait for the Welsh Labour manifesto to get a complete picture of Labour’s plan. Both parties have mentioned some large numbers, but what are the implications for Wales?

Labour’s manifesto is accompanied by a policy costings note that outlines costs of the new tax and spending measures. What we know so far is that, in line with its proposed Fiscal Credibility Rule, under which it would only borrow to finance capital spending, Labour has pledged to:

Labour says that its spending plans envisage a ‘consequential’ of £6.1 billion a year for the devolved nations, presumably as the new spending programmes become fully operational. We calculate that the Wales share would be just under £2 billion a year – roughly a 15% increase in cash terms on the current Welsh Government resource budget, although this amount might be affected by a promised review of the devolution funding formula.

The main elements feeding into the devolved settlement include plans for increased spending in England, for example on the NHS, a National Care Service, childcare, schools, further and higher education – including the abolition of tuition fees – and police (to be devolved, under the manifesto). Not all the proposals are directly relevant to Wales (e.g. Wales never abolished the Education Maintenance Allowance which UK Labour wishes to restore in England) and it will presumably be for Welsh Labour to decide how far it would mirror commitments such as the abolition of tuition fees. Abolishing tuition fees in Wales could cost upwards of £270 million a year,[1] although it should be noted that higher education financing in Wales will soon be reorganised substantially following the 2016 Diamond review.[2]

Labour is probably hoping that its proposals on benefits (ending the bedroom tax, changes to ESA and Housing Benefit, increasing carers allowance, etc.) will improve social justice and ease some pressures on public services (although Labour is also committed to maintaining commitment to the triple lock on pensions, which will likely be a growing cost). There would also be some offsetting increased costs for public services. The proposed removal of the public sector pay cap would surely lead to new pay negotiations. For example, indexing public sector pay in Wales to CPI inflation would add roughly £300m to the NHS Wales paybill and £175m to the paybill for teachers over 2018-19 to 2021-22.[3]

Although Labour’s policy of increasing the National Living Wage (minimum wage) to align it with the higher, independently-assessed, Living Wage is a welcome policy that could help take low earners out of precarious situations, it is also likely to further increase social care costs. The Welsh government has already announced measures to help the Welsh social care sector meet the costs of the Conservatives’ National Living Wage[4] so a steep increase in the higher minimum wage could require further Welsh government support.

In addition there is also a blanket commitment that the countries and regions of the UK would not lose out from the loss of EU regional funding, but no mention is made of the expected costs of Brexit negotiations and UK withdrawal from the EU.

Labour’s proposed Fiscal Credibility Rule has much in common with previous fiscal rules but it is the scale of the borrowing envisaged under the rule which will attract comment. In crude terms, £250bn for the National Transformation Fund is equivalent to about 12% of UK’s GDP in 2017-18. If Labour borrow £25bn a year over the 10 year period, this is equivalent to about 1% of GDP per year, and is about 50 per cent more a year than is spent on capital at the moment (£47bn in 2016/17 in 2017/18 prices.[5] It is worth noting that this borrowing is in the context of high levels of UK national debt that has accumulated from about two thirds of GDP in 2009-10 to almost 90% of GDP in 2016-17 under previous governments (ONS, 2017).[6] Labour have stated that they are committed to lowering national debt as a share of GDP by the end of the next parliament, similar to the current Conservatives’ supplementary fiscal target, although they have not presented any figures to show how they might achieve this pledge. It is also not clear from Labour’s financial plan how it might finance its proposed renationalisation of public utilities (rail, energy, water, Royal Mail).

Wales would also have its Barnett share of the National Transformation Fund for improving transport, roads, digital communications, housing and other capital, but which it cannot use for day-to-day spending.

The big numbers in the Plaid Cymru manifesto include the demand, with the EU Referendum in mind, that the promised ‘£350m a week’ promised by Vote Leave allegedly saved from leaving the EU be allocated to the NHS – this would add up to around £18bn a year.[7] If this were true, and assuming the £18bn were part of the funding that would go through to Wales, Wales would get around £1bn a year. Whether this would be enough to meet in full the Plaid commitment to training and employing 1,000 more doctors and 5,000 more nurses over the next 10 years, setting up a medical school and to realising its social care rescue plan (few details on the nature of the plan are given), as well as meeting health and social care pressures that are set to rise in the future, remains to be seen. Plaid has not released a policy costings statement and there are few financial details in its manifesto. However, Plaid is also seeking the devolution of further significant tax powers, such as Corporation Tax, as well as a fairer funding settlement, all of which might have a bearing on the funds available to the National Assembly.

Similar to the UK Labour party, Plaid will work towards abolishing tuition fees in Wales, scrapping the bedroom tax, and will also introduce an independently verified Living Wage. Like Labour, Plaid is also maintaining commitment to the triple lock on pensions. The implications for Wales are similar to those discussed above. Plaid also pledge an extra £25m for Welsh police forces.

In contrast to Labour, Plaid is opposed to Trident renewal and wants to reallocate the funds to other purposes, including conventional defence.

Plaid has also demanded that Wales should not lose any funding as result of Brexit, but again, details over the potential costs of Brexit are lacking.

Regarding capital, Plaid is seeking a £7.5 billion investment in infrastructure, through a better share of UK infrastructure funding, to spend on transport, communications and other infrastructure.

The key message on public services provision from both parties’ manifestos is about significant increases in spending, investment and improvement in public services. Once the other parties have launched their manifestos we shall post a similar analysis of their proposals. We will also pay a closer look to the main parties’ proposals on health & social care and education.

[2] Review of HE funding and student finance arrangements

[3] The NHS employee costs were taken from the NHS Wales Local Health Board and Health Trusts summarised accounts, and exclude agency staff. Employee costs to schools were calculated by taking the numbers of teachers and teaching assistants in Wales from the National Education Workforce Survey Research Report April 2017, and multiplying them by their respective average salaries (£26,544 and £16,015 taken from https://www.adzuna.co.uk/jobs/salaries/wales/).

[7] The UK’s contribution in practice is significantly less than this, when taking into account the UK’s budget rebate from the EU and the amount reinvested in the UK through EU grants and payments. See: http://www.europarl.europa.eu/RegData/etudes/BRIE/2016/577973/EPRS_BRI(2016)577973_EN.pdf

IER's Lynn Gambin to provide evidence on Apprenticeships to Committee on Education, Skills and the Economy

Lynn Gambin has been invited to provide evidence to the Select Committee on Education, Skills and the Economy for their inquiry into apprenticeships and the 'skills gap'. Lynn will appear before the committee along with other academic experts, apprenticeship training providers and the National Union of Students on 8th June at 2pm. For more information on the Committee's Inquiry and the evidence session, see http://www.parliament.uk/business/committees/committees-a-z/commons-select/education-skills-and-economy/news-parliament-2015/apprenticeships-evidence-16-17/

Previously, Lynn served as Specialist Adviser to the Education Select Committee on its inquiry into Apprenticeships and Traineeships for 16-19 year old (see the Committee's report here).