New Futuretrack Reports: Ten Years On - and the impact of the pandemic on graduate careers

The publication of the Futuretrack Stage 5 study conducted in 2019, led by Professors Peter Elias and Kate Purcell and funded by the Nuffield Foundation, showed ‘how the majority of graduates had by then achieved reasonable job security, with many balancing work and parenting or other caring roles when the pandemic hit’ (see press release). In 2020, the research team went back to respondents to investigate how they had been affected by the Covid restrictions and economic impact and conducted Futuretrack Stage 6.

For full details of the research see:

The impact of postgraduate qualifications on employment prospects in the UK

Erika Kispeter gave a talk at the Westminster Higher Education Policy Conference online event entitled ‘The graduate labour market post COVID-19' on 20 October 2020. The conference focused on how university careers services, employers and governments should prepare students for employment in the UK in the wake of the Covid-19 pandemic.

Erika’s talk on the 'The impact of postgraduate qualifications on employment prospects' drew on the results of the recently completed research project 'Degrees of Advantage? A longer-term investigation of the careers of UK graduates', the latest stage of Futuretrack, IER’s longitudinal study of graduate careers. The study follows a cohort of UK graduates who started their university education in 2006.

An online survey catching up with UK graduates almost ten years after their graduation to gather data on their working lives has just launched. The survey is a key part of the fieldwork for the fifth wave of the Futuretrack longitudinal study into the careers of UK graduates.

The unique Futuretrack study is run by the University of Warwick’s Institute for Employment Research (IER) and funded by the Nuffield Foundation. Futuretrack follows a large sample of students who applied to university in 2005/2006 and aims to gather detailed insights into the kinds of jobs graduates are doing in the longer-term, how they got them, whether higher education has contributed to social mobility.

The Futuretrack Stage 5 survey, a key part of the fieldwork for the fifth wave of the Futuretrack longitudinal study into the careers of UK graduates, has just gone live. The research team sent out an email invitation to existing Futuretrackers via Qualtrics to participate in the online survey. We have been working hard designing and testing the survey, and are now looking forward to receiving the responses.

The unique Futuretrack study is run by the IER and funded by the Nuffield Foundation. Futuretrack follows a large sample of students who applied to university in 2005/2006 and aims to gather detailed insights into the kinds of jobs graduates are doing in the longer-term, how they got them, whether higher education has contributed to social mobility, and how the experiences of the Futuretrack cohort compares with earlier graduate cohorts.

In Stage 5, we have placed an increased focus on the varied ways of navigating the labour market, as 'non-standard' forms of employment (anything short of a 9-5 permanent job) are becoming more common. We also place more emphasis on people's personal circumstances, housing situation and family life, as these issues start to become more pertinent. We hope to explore some of these issues in more detail through interviews with respondents.

The last time we were in touch with the Futuretrack participants was back in 2011/12, when we looked at what kinds of jobs recent graduates were doing around two years after their graduation. The subsequent report presented the main findings, including graduates' views about their jobs, choices about higher education, and outlooks for the future.

The new fifth stage, Degrees of Advantage, provides a timely opportunity to catch up with the Futuretrackers to see how they have navigated the labour market over the longer term. The fieldwork will comprise an online survey that should take around 20 minutes to complete, hosted by Qualtrics surveys. New to Stage 5 is the collection and analysis of qualitative data to shed more light on participants' experiences since graduating to date.

The new fifth stage research team is led by Dr Daria Luchinskaya, with Professor Chris Warhurst and Professor Peter Elias, and Gaby Atfield, Dr Wil Hunt, Rosie Day and Stef Poole at the Warwick Institute for Employment Research. The research team can be contacted with any questions at Futuretrack2006@warwick.ac.uk. 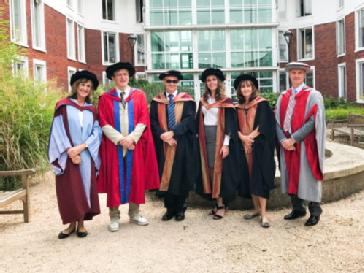 Four members of staff were also involved in the academic procession to honour this wonderful achievement.

All of our new doctors have succeeded in juggling work and/or family commitments while coping with the many stresses and strains of the PhD 'journey'.

We wish them all the best in their future careers. Huge congratulations.